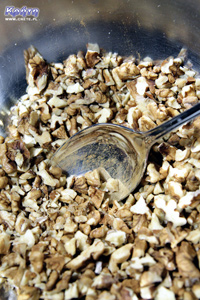 on a small two-layer baklava:

Baklava is probably the most famous Greek dessert. However, let us put aside the genesis of its creation, because Turks, Bulgarians and several other Balkan countries also admit to the invention of baklava. The difference between the ways of preparing this dessert in individual countries basically boils down to small modifications in the filling and syrup. In different countries, in addition to walnuts, almonds, pistachios and even walnuts are added. Depending on the region, honey, lemon or orange peel or rose water may be included in the syrup. Nevertheless, since the Greeks have invented almost everything, the baklava is probably also ;-)

Most of the dishes for preparation of which filo pastry is used are in the form of a layered translucent, baklava is not an exception. A few layers of nuts mixed with spicy spices, a thin filo, all soaked in aromatic syrup is a recipe for creating a delicious dessert.

1. We start the preparation of the baklava from the filling. Chop the nuts, mix with spices, sugar and melted butter.

2. Melt the butter and spread it on the baking mold. Preparing the dishes made of filo pastry, I melt the butter in portions, which is why the amount of ingredients I give is rather approximate.

3. At the bottom of the baking dish, put a few pieces of filo each of them in turn lubricating with butter using a silicone brush. Many people advise you to cover the rest of the dough with a damp cloth while lining subsequent sheets of filo, as it has a tendency to dry out. I never do it, because I apply layers and layers at a fast pace.

4. After applying 5-6 slices of filo on the bottom of the dish, spread half of the previously prepared nut filling on them. Lay the next two slices on the layer of nuts and grease each one of them, then put the rest of the nuts. On the top, put the rest of filo pastry and carefully apply the butter on each piece.

5. Top layers of filo cut with a knife in diamonds, so that after baking baklava can be cut easily. You just need to be careful not to cut the bottom layers.

6. Bake Baklava at a very low temperature of about 150 degrees without air circulation, for about 50-60 minutes. It is important that the dough is browned and crispy.

7. During baking the baklava should be prepared syrup, which will soak it after baking. Put water, honey, sugar, juice, orange peel and spices on slow heat for about 15 minutes. After preparing the syrup you have to cool it down.

8. Pour the hot baked baklava over the ice with a uniformly cooled down syrup and set aside for a few hours in a cool place so that the dough absorbs the syrup. 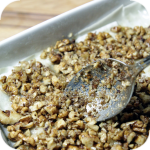 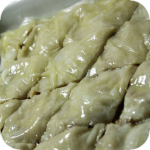 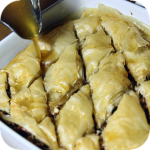 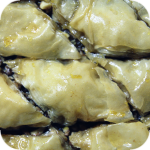 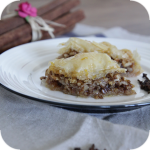 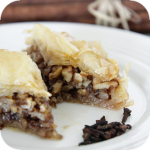 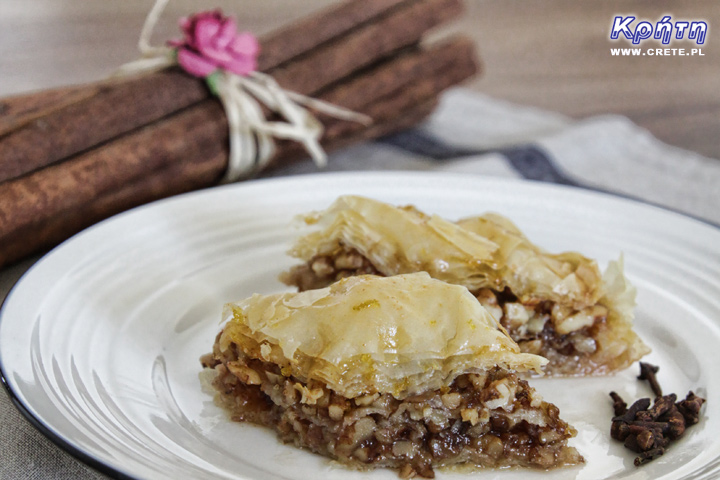 Redirected from the site - Baklava (Μπακλαβάς). Baklava is probably the most famous Greek dessert. However, let us put aside the genesis of its creation, because Turks, Bulgarians and several other Balkan countries also admit to the invention of baklava. Nevertheless, since the Greeks have invented almost everything, the baklava is probably also ;-)

Kourabiedes are Greek butter cookies traditionally baked on the occasion of Christmas and larger family celebrations. According to the legend, their characteristic crescent shape was used during the Turkish occupation as a reference to the Turkish flag. After Greece regained its independence, these cakes began to be formed into other shapes, most often round and flat.

Glyka tou koutaliou is a Greek delicacy that means fruits (usually) made in very sweet syrup. Such delicacies sometimes offer taverns at the end of the main meal, it is also a popular addition to desserts. Trying them can be a real test of resistance to the Greek definition of sweets. On our website we have already given a way for cherries in syrup, and today we add a recipe for the preparation of cherries. We chose one of the simpler and less time-consuming recipes that we have been using successfully for several years. 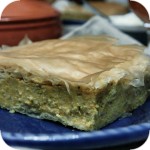 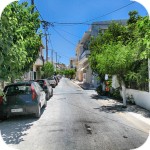 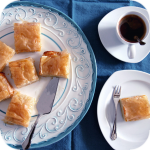