For a good few decades, his everyday life is almost exactly the same as the previous ones. He gets up early in the morning, gets on his bike and travels through a thicket of narrow streets. At eight o'clock, he is almost ready to open his own inconspicuous plant located in the old part of the city of Rethymno. He dresses up in an apron and performs a well-known job for the next 12 hours. 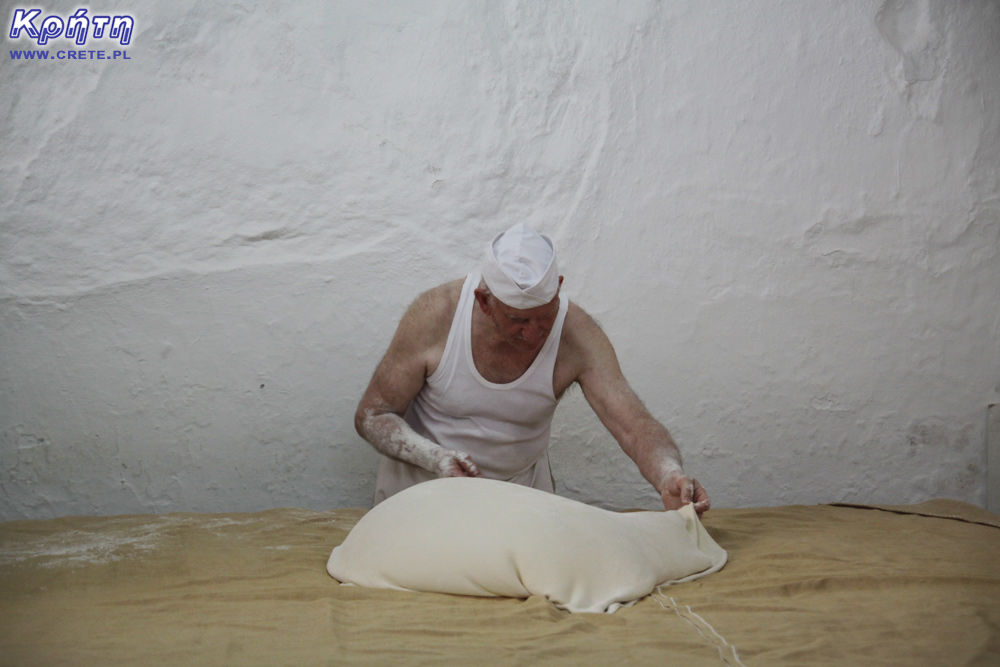 Passion of work and taste

Many of you may say that it is boredom and routine, but these words would never appear on the lips of Giorgos Chatziparaschos. The word passion is definitely better suited to the work of this inconspicuous 82-year-old Cretan, which manifests itself in every movement and inconspicuous gesture made during the production of filo pastry.

Mr. Giorgos is one of the last producers of confectionery created on the basis of the hand-made filo pastry. Unfortunately, today its desserts have to compete with machine production, which is available at nearby prices in nearby tourist stores. The unique taste is however what makes tourists and local residents still come back here. If someone is looking for the original taste of traditional Cretan sweets, he should add a visit to the plant to his plans.

The dough has its own rules

The base of filo pastry consists of only three ingredients: water, flour and a bit of salt. The result of an infinite number of attempts is the proprietary recipe, in which the proportions of the ingredients and the way it is made is the family secret. However, as Mr. Giorgos says, not only is he a recipe for success: "The cake has its own rules" and their exploration requires many years of learning based on their own mistakes. It is worth mentioning that the filo pastry does not like high humidity, so Mr. Giorgos never works with him when it looks like rainy weather.

The magic of creating perfectly thin filo slices does not end, however, only at the stage of kneading dough. No less important and definitely more spectacular is the moment when the finished cake goes into the hands of Mr. Chatziparaschos. A few efficient moves turn them into a cake with the size of a large pizza, Still enlarged at last with a skilful throw on the table turns into a big inflated balloon. As in the picture illustrating this article. Now the process of gentle stretching of the dough takes place, which will eventually take the size of a large table located in the central part of the room.

It is among others this stage of creating filo lobbies attracts tourists. Sometimes you can meet even a dozen people here, who are amazed to see this unusual cheerleading which is made by the cake passing through the hands of Mr. Chatziparaschos. The second reason why you should look into this inconspicuous place is the opportunity to buy original fresh Greek sweets produced here from the filo pastry there, to which we strongly urge you on the basis of your own experience. 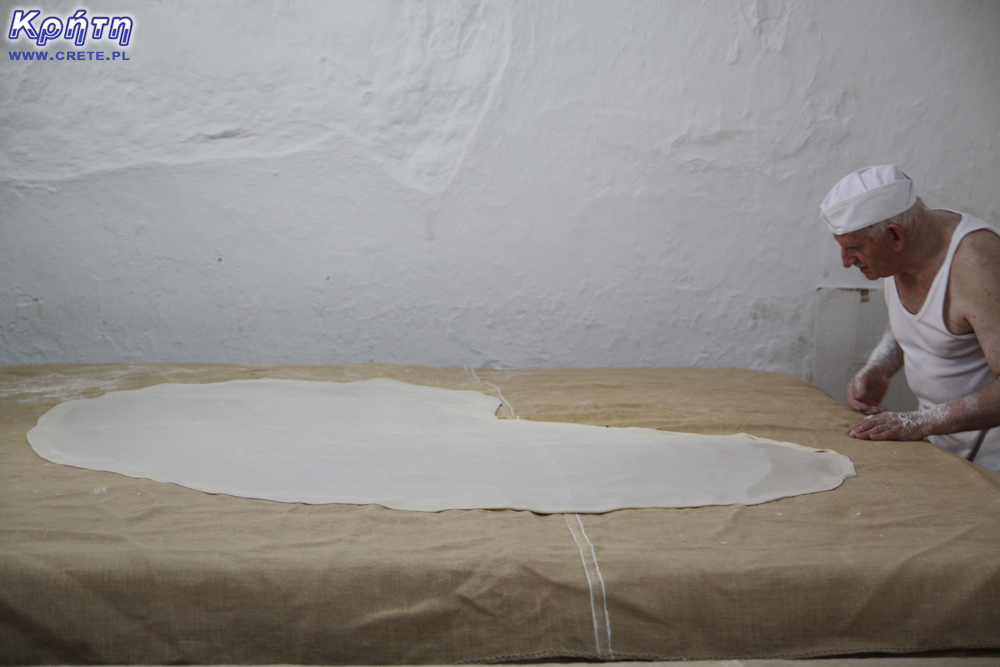 It is also worth mentioning that this small plant is a real family business, in which three generations of the Chatziparaschos family meet together. Paraskevas son of Mr. Giorgos, who is an engineer by profession, will be the person who will replace him when he finally decides to retire. At the table where the filo is produced, you can also meet the youngest generation of the family, who in the holiday season is happy to help his grandfather and father. And all the work is done under the watchful eye of grandma Katerina, who for over 50 years is not only a life partner of Giorgos, but also a demanding business partner.

For now, the nestor of the family still does not think about rest and as he says: "I can not be away from my Kataifi" and filo. With a quiet giggle he also adds "What can I say, I love this job".

Finding this bet is not difficult, especially if you follow our tips. Crossing the gate of Megali Porta, go straight ahead walking Eth. Antistaseos (Εθνικής Αντιστάσεως), which is one of the main shopping streets of Rethymno. After reaching the Neratze mosque, turn left onto the small street of Emmanuel Vernadou (Εμμανουήλ Βερνάδου). Patisserie of the Chatziparaschos family is located on the left side of the street in a modest building number 34, which is only a few dozen meters from the main intersection. After visiting this unusual place, we encourage youYou can visit the nearby Folklore Museum, which we described in one of the earlier articles. 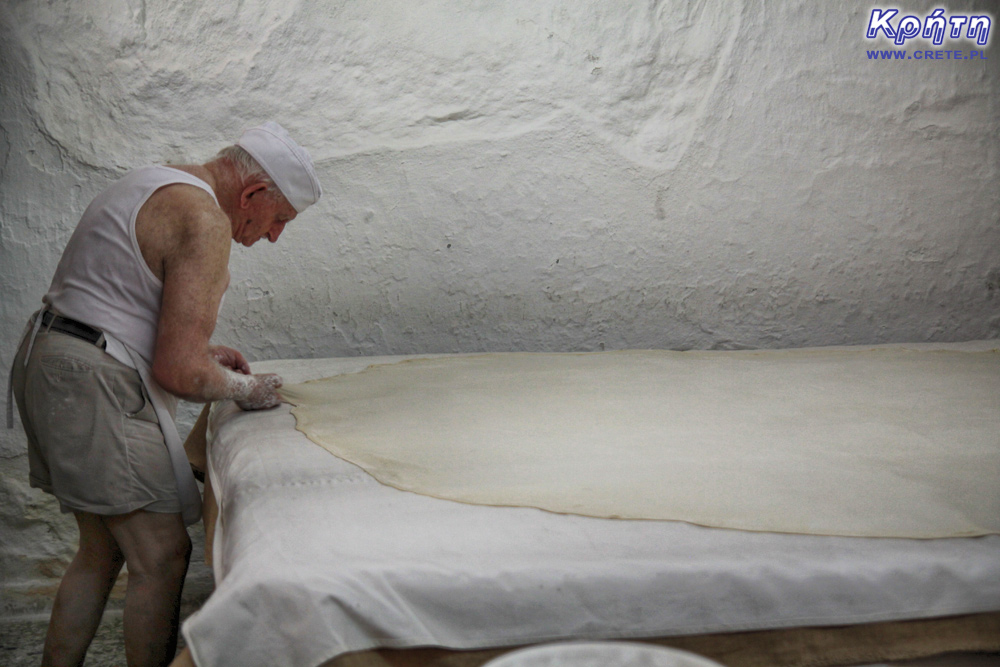 During the creation of our description, we used the interview of Marissa Tejad posted on http://culinarybackstreets.com .

When in 2008 for the first time we came to Nida, we dubiously entered the only tavern located on this plateau. A large building, which is difficult to call a finite one, did not give a very optimistic impression. Above the windows, someone using the oil paint smeared the word TABEPNA. It looked a little professional and looked like an abandoned building. 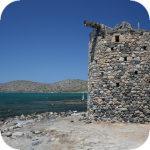 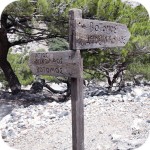 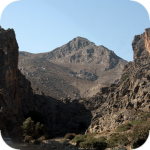