Rankig travel agencies according to Rzeczpospolita

Each day brings us closer to the full inauguration of the holiday season. Some of you have already planned independent trips, which are just attached to the last button. However, as every year, one of the largest groups of tourists going to Crete and Greece will be people who entrust the organization of the trip to one of the Polish travel agencies. In making your decision, of course, if you have not yet made it, the ranking of travel agencies , which was prepared by the Rzeczpospolita newspaper for the third consecutive year, may help to choose a possible tour operator. Of course, this is a subjective ranking, the evaluation of which is based mainly on the financial results obtained by individual travel agencies in the previous year. Such factors as customer satisfaction and quality of services do not affect the position of a given travel agency in the ranking. On the basis of the financial report from 2013 and the current market situation in which the company is located, a general recommendation regarding the prospects of a given tour operator is also issued.

In the list prepared by Rzeczpospolita, it is worth paying special attention to the financial condition of travel agencies. Some of them, despite the fact that they pride themselves on the positive outlook granted in the ranking, have noticed notorious losses in recent years and are struggling with shortages of own resources. In the case of tourism enterprises, this is not an extraordinary situation, as the profitability of this type of business entities is characterized by a very low level. This should, however, raise concerns especially in the case of companies whose offer is largely based on the service of difficult and unpredictable tourist destinations. One of such popular but not stable markets is Egypt and other countries of North Africa. Looking through the dry figures and considering the positives for the travel agency X or Y, do not forget that to a large extent about the satisfaction of your holidays will decide the right choice of the right hotel that meets your requirements. In the case of tourists who can manage their own time, contact with employees of the chosen travel agency is limited to transfer from and to the airport. The ranking of travel agencies may be particularly helpful for such people, as it allows you to independently assess the security of a given "purchase of a service". If you are interested in buying a trip organized by a travel agency, our additional recommendation is - do not use intermediaries. In most cases, self-booking is no less convenient, and gives a much greater guarantee of the success of the transaction.

Our subjective assessment of the situation on the tourist market

Good last year's season slightly stabilized the situation on the tourist market and was a good forecast for this year's holiday. This peace was especially important and very much awaited by travel agencies, which after poor 2012 did not raise much trust among potential customers and additionally did not enjoy good press. In any case, the tourists' fears were unfounded, as those holidays were full of information about the bankruptcies of subsequent tour operators. At the end of the season, the total number of travel agencies that went bankrupt reached a record high of fifteen companies.

These holidays promise to be very good from the point of view of travel agencies. Looking through the current offers, it can be seen that in the case of good hotels enjoying a positive customer opinion, the number of last minute offers is clearly cut off or even unavailable. Therefore, it can be presumed that in such cases, the travel agencies recorded considerable interest, which also translated into a large number of early bookings. Unfortunately, it is also visible from the perspective of prices, which are significantly higher compared to last year.

Finally, it is worth mentioning that legal changes announced in the crisis year were still not implemented, and which were aimed at increasing the safety of customers. The draft laws are stuck somewhere in the depths of the legislative machine. The only change that already exists at the moment is the increased sum of insurance guarantees imposed on new travel agencies. Economic entities involved in the organization of holiday trips, in which the transfer of tourists is carried out by air, are forced to buy a guarantee for the amount of 250 thousand. €. Perhaps this will allow avoiding the situation where the next new "brand" was obliged to buy symbolic insurance based on poor or zero turnover generated in previous years.

Ensuring the highest quality bathing water is a priority for Greece. Its quality has been systematically monitored since 1988 as part of a program organized and coordinated by the Ministry of Environment, Energy and Climate Change (MEECC). Since 2010, a special program has also been implemented on the management of bathing water quality, which aims to protect the marine environment and health of bathers.

Crete - a map of fire hazards

Crete - a map of fire hazards 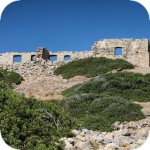