Kreta ›
What to see in Crete ›
The unique fauna and flora of Crete ›
Wild Cretan goat, or Kri-kri

From time to time, the topic of Kri-kri goats (Greek κρι-κρι) returns in questions and comments like a boomerang. However, we have noticed that most people confuse the ordinary common goats, which are abundant in Crete, with the actual Kri-kri goat. Meanwhile, the look of this goat is so characteristic that knowing its appearance, you cannot confuse it with ordinary breeding goats.

Kri-kri is the symbol of the island, and its image is eagerly used in official publications, decorations as well as in the usual stall souvenirs. It is a bit paradoxical because relatively few tourists spending their holidays in Crete had the opportunity to see the "real" Kri-kri with their own eyes, as well as a large part of the inhabitants of this island. 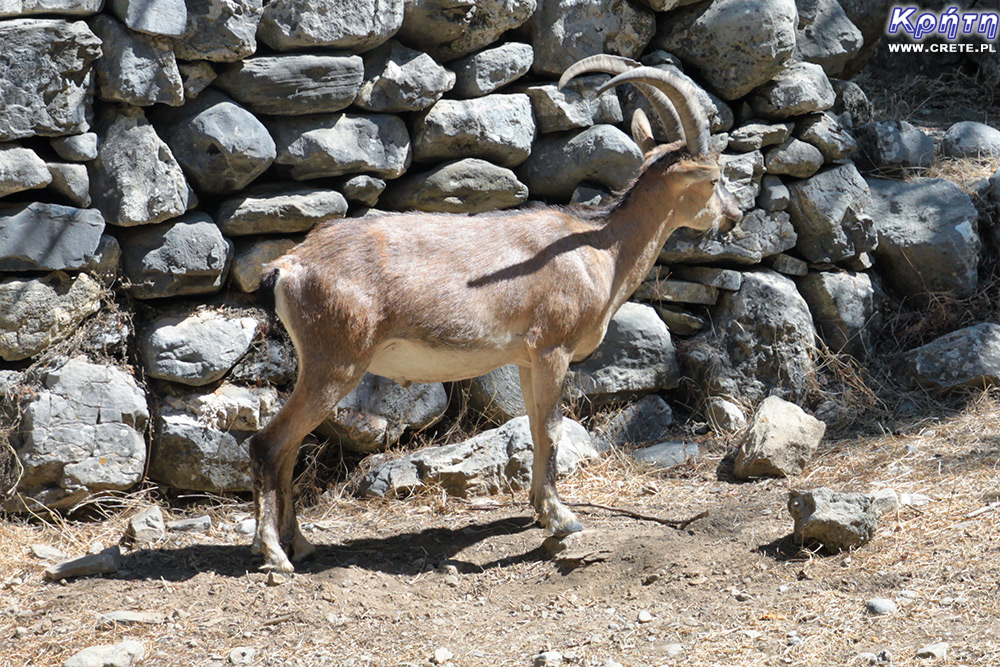 The characteristic appearance of the Kri-kri goat

The full Latin name of this subspecies of animals is Capra aegagrus cretica . You can also come across the name agrimi , meaning a wild goat or simply a Cretan goat. This large ungulate mammal is also called the Cretan goat or the wild ibex. It is considered to be the ancestor of domesticated goat breeds.

Capra aegagrus cretica comes from the region of Asia Minor and the vicinity of the eastern Mediterranean basin, where it existed already between 8000 and 7500 BC.It appeared in Crete in the Minoan era, as evidenced by its images discovered on wall paintings of archaeological excavations from that period. Some scientists say that this animal was worshiped on the island in ancient times. Currently, this goat does not occur in other areas, therefore it is considered an endemic species of Crete. 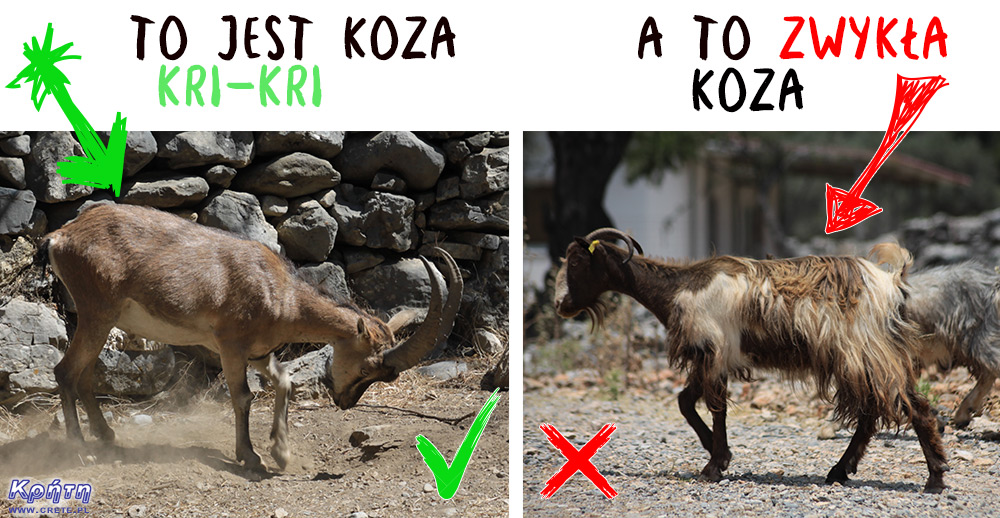 The most important difference between Kri-kri and common goats is in their appearance. Kri-kri's coat is short, light brown, often beige, with a dark stripe running across its back. In October and November, their hair becomes slightly lighter. The head of Kri-kri is decorated with characteristic backward-curved horns, which in older males can reach a length of more than one meter. We, unfortunately, have not met any specimen with such impressive horns so far, so in our photos you will see Kri-kri goats with much more modest horns. The height of the goats, depending on the sex, varies between 55 and 90 cm. Similar differences also exist in the weight of adults. Males can weigh up to 90 kg, females are much lighter: their weight reaches a maximum of 55 kg. 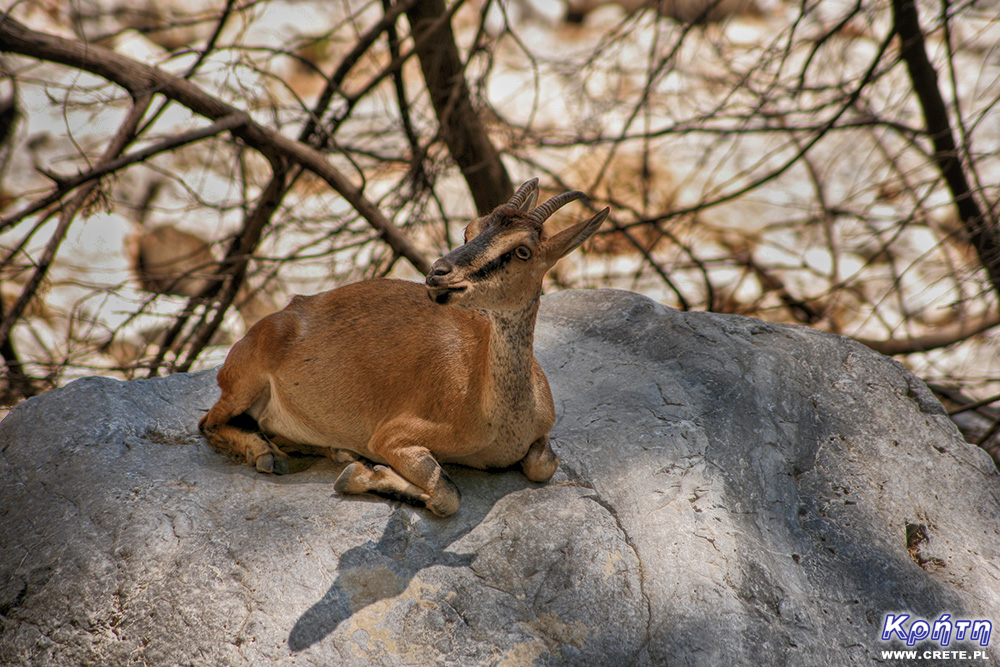 These goats live in herds of up to 20-25 individuals, of which there is only one male and the rest of the herd are females with young. Despite its polygamous nature, the male chooses a solitary life during the mating season.

This goat is found in the steep mountain areas of the White Mountains of Crete and several small islets close to it: Dia, Agioi Theodoroi and Agios Pantes. They can easily jump up to 8 m and climb steep cliffs where they find food, i.e. grass and shrubs. They avoid tourists, although if you have been to the Samaria Gorge, you must have met a few more tame individuals. You can come across them especially in the old village of Samaria, where they approach people without fear and look into their backpacks in search of easy food. However, these are isolated cases, normally these animals are considered rather shy. 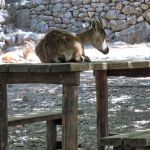 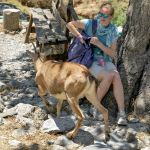 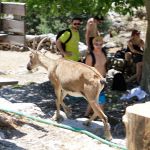 In the 20th century, the proud Agrimi goats were threatened with extinction. It is estimated that in the 1960s there were only about 200 animals left on the island. Unfortunately, during World War II, during the fights that took place in Crete, these goats were the main source of food for Cretan partisans. Although the meat of this goat has been food for people since the Minoan times, it was only a relatively short period of war occupation that almost led to the destruction of this species. 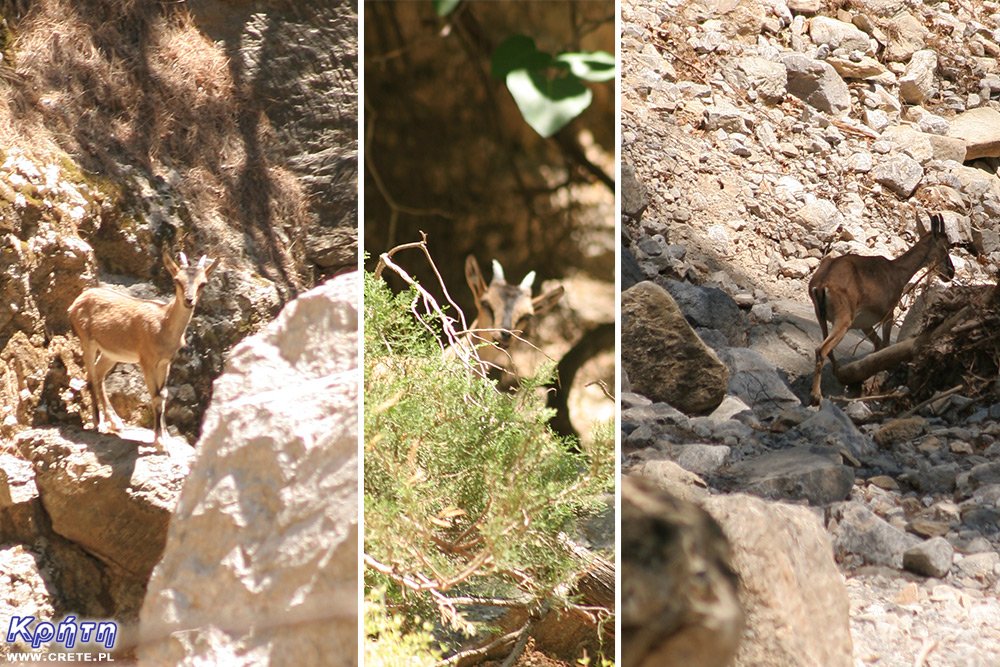 Kri-kri goats met on the trail rather avoid people

Agrimi survived in Crete thanks to Georgios Giannakopoulos, who led to the creation of the Samaria National Park, where these goats were still found naturally. It is also worth mentioning that now Samaria National Park is home to fourteen other endemic animal species protected by UNESCO as a biosphere reserve. Thanks to these activities, in our time the population of this goat is around 2000, but they are still considered endangered. Currently, this species is under state protection, so hunting it in Crete is strictly prohibited. However, this does not change the fact that occasional poaching continues and poses a threat to these animals much greater than the restriction of their pastures.

The only place where you can legally hunt Kri-kri is the nearby island of Zeus. However, the hunter must have a special permit obtained from the authorities of the Heraklion region. Nowadays, mixing with common goats is also considered a serious threat to the existence of the kri kri goat. The hybridization of these animals causes the offspring that are born into the world to have different characteristics than those of the Cretan goats at the time they inhabited Crete. Hence the need to protect this species and isolate them, for example, on the small islands mentioned above. 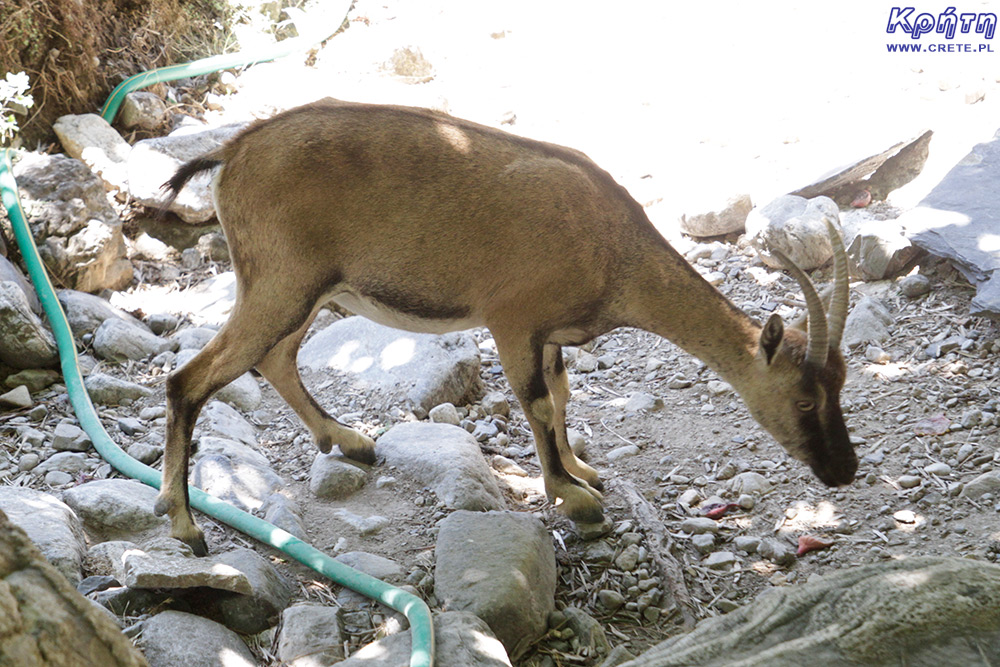 Kri-kri in the village of Samaria

And finally, a curiosity about the genesis of the most popular name Kri-kri by which you probably also know these animals. Well, we owe it to the Americans who combined the first syllables of the words "Cretan creature" and that is how they "baptized" this goat. Americans met her in the 1950s, when one of the Cretans wanted to donate a Cretan goat to American President Truman.

The president not only accepted the donation, but later even invited the donor, Eftychi Protopapadakis, to Washington. The wild Cretan goat soon found its way to the Washington Zoo, where it was briefly a "jewel". The animal probably did not survive in captivity and died soon. 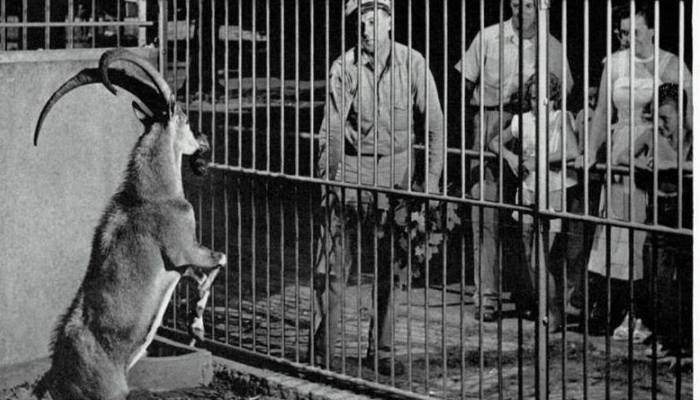 Goat Kri-kri in the American Zoo 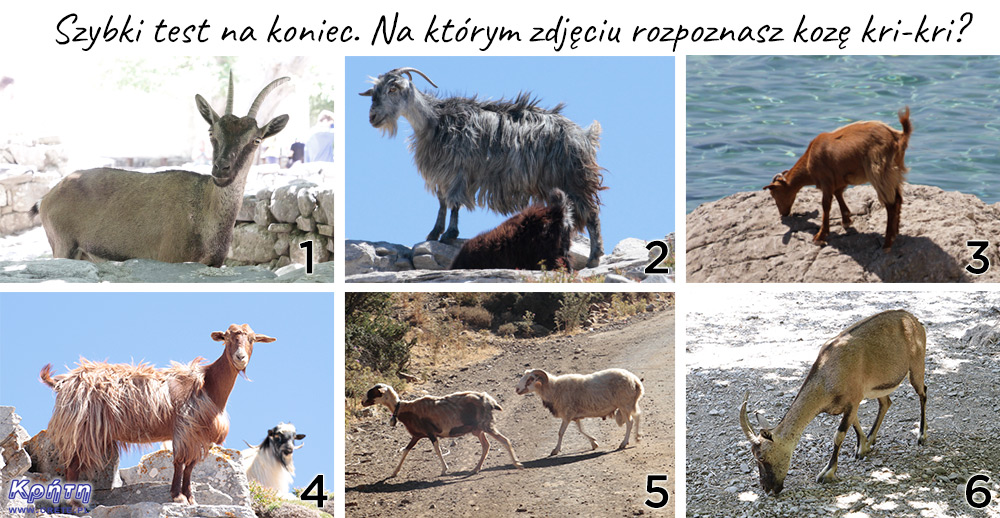 The turn of May and June is a special period in Crete in which Caretta caretta turtles begin their breeding period. These turtles once a year go ashore to lay eggs and, among other things, Crete is the place where the new generation is hatching. Unfortunately, the population of this endangered species is systematically dropping, so to ensure the breeding conditions for the animals and allow the young to travel safely to the sea, special patrols are being made to control the beach and watch over the established nests. May 23, when the World Turtle Day falls, was a good opportunity to look for their first traces of this year in Crete, and the first nest was noticed just this past Saturday. 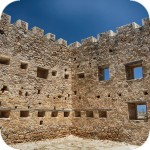