Zorba 50 years later is in many respects a very thoughtful and extraordinary publication, which is very hard to qualify for a specific single category of books. Each time such an unambiguous declaration would be detrimental to the work of Tomasz Zaród. The handy format is definitely closer to the guide than to a typical photo album. On the other hand, the very way of presenting the content and velvet-like Arctic Volume Ivory paper means that you will still have the impression of being in contact with the album while holding this publication in your hands. One of the great values ​​of this book is that this project will still be alive thanks to the next readers. Each of us can add our own chapter based on our own experience. Just go on your next trip, this time in the footsteps of Tomasz Zaród and of course the Greek Zorba. Photographic journey in the footsteps of the Greek Zorba

Although more than 50 years have passed since the implementation of the Greek Zorba, some of the film locations look as if the lapse of time has stopped. Following several pages dedicated to the monastery of Agia Triada, one can get the impression that only individual details allow us to distinguish contemporary photographs of Tomasz Zaróda from shots taken in 1964 by Walter Lassally.

However, such locations, where time stood still, constitute a decided minority. Many of the cinematic plein-airs have changed so much that the author of the book, despite insightful searches, has not been able to reach them. It is quite possible that some of them have been devoured by the current development thus becoming an integral part of it. Certainly a large part of the buildings and landscapes also simply perished under the pressure of modern times or are undergoing degradation.

Just looking at contemporary Stavros gives you an idea of ​​how much Crete has changed over the past five decades. The outline of the bay and the mountains closing its eastern part is still the same as in the film. However, much more densely built buildings do not look like the movie area of ​​Basil's house. Once an empty beach, today is a bustling place full of tourists who like to spend their holidays here.

In the book you will also find some clever details that make her browsing a lot easier. It is worth mentioning that some of the described locations have in their description given the exact geographical coordinates allowing for instant route designation. Just a few clicks on any digital map or GPS navigation to find these places. The upper progress bar, which allows quick location of film frames used by Tomasz Zaród, may prove to be equally helpful. Walter Lassally - a treasury of information about the Greek Zorbie

The final chapter created by Walter Lassally is also an unbelievable value of the book. You will find there a lot of interesting information related to the implementation of the Greek Zorby. Some of them are very surprising. It is worth mentioning that the interior shots of Basil's house were shot with the help of an "open" reconstruction created in the studio. And the scene of a 'beautiful catastrophe' is a shot fastened a few months after the end of the set.

A dream with a larger format

As we wrote at the beginning, the book "Zorba 50 years later" is a very unique project that in an unusual way honored the anniversary of this great film. We hope that in the future we will also have a resume, which will have a slightly larger format. Such an edition would allow you to enjoy a bit bigger photos. May the Greek climate have positively benefited our dreams.

Anyone who is close to the topic of Greece certainly knows the name of Dionisios Sturis, who for a long time is trying to bring the problems of Ellada residents to the Poles. Many people associate him with the TOK FM radio, where he is a "duty" journalist dealing with the strike of Greece. Certainly not one radio listener wondered how it happened that the Greek speaks so beautifully in Polish and in general how he came to our country. "Bitter oranges" allow to unravel this puzzle and give you a chance to learn many interesting facts from the history of modern Greece. We, for our part, definitely recommend this book ... with the hope that in the future Dionisios Sturis will be tempted to write another equally interesting item.

Michal Ajvaz - Journey to the south

Escaping from the cold of northern Europe, two Czechs meet in a sleepy Loutro and take a peculiar journey into the history of one of them. This is how using the smallest possible number of words you can describe the content of the book Journey to the South. However, it will be a very dry and unjust description, which certainly will not encourage anyone to acquire this position. And in my humble opinion it is worth it. This is a book to which I will come back, and I will certainly be happy to travel to the south again in some time.

Today, we would like to recommend you a unique book about Crete, whose appearance on the reading market, unfortunately, without much echo. It's a pity, because "The Travel Charm" by Michał Obst Głombiowski is one of the few publications that shows Crete from the kitchen, after the season, after the last tourists leave here. We highly recommend and encourage you to read our review. 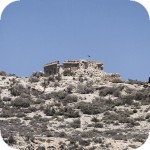