Landscape after the earthquake in Crete

In today's post, we summarize a bit more extensively yesterday's events in Crete. As you know from the short post we posted yesterday on Facebook, on Monday (September 27) at 9:17 a strong earthquake was recorded in Crete. According to the Geodynamic Institute at the National Observatory in Athens, the strength of the tremors was estimated at 5.8 on the Richter scale.

The epicenter was several kilometers southeast of Heraklion near the village of Arkalochori and a depth of about 10 km . The earthquake was so strong that the quakes were felt almost all over the island. Fortunately, places farther from the epicenter did not feel the destructive force of this element. The range of their operation is perfectly illustrated on the google map below. 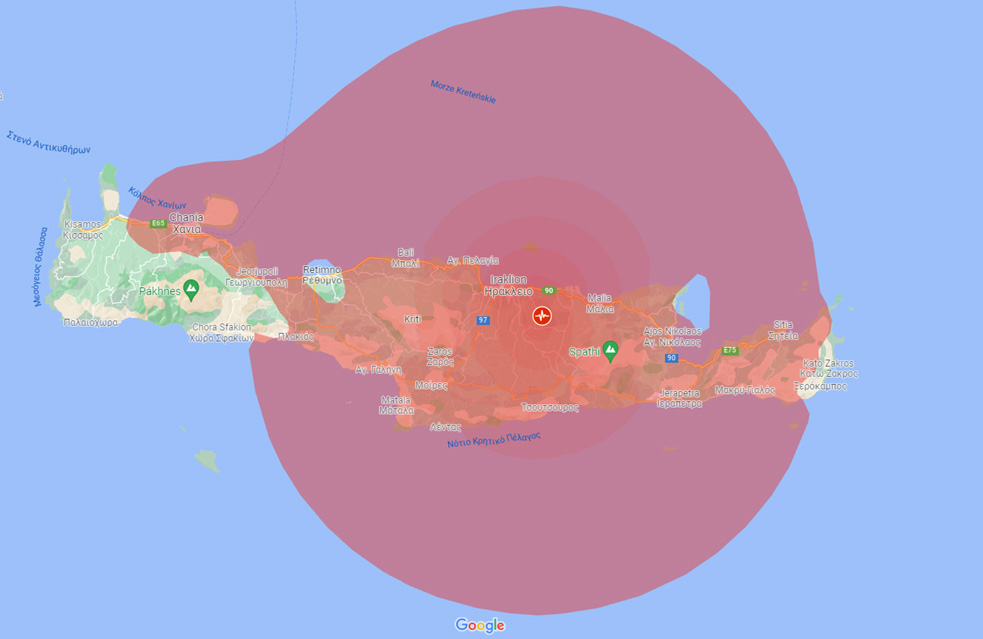 However, this morning at 07:47 the ground near Heraklion shook heavily again. This time the strength of this quake was rated 5.3 on the Richter scale. Its epicenter was 22 km southeast of Heraklion and more than 13 km deep. It was the ninth earthquake in the last 24 hours, the magnitude of which exceeded 4 degrees. Eftymis Lekkas, professor of geology, in an interview given to one of the local newspapers, assessed that the strength of today's aftershocks is consistent with his expectations. He also suspects that subsequent earthquakes should be weaker and weaker. It is certainly good news for all victims. 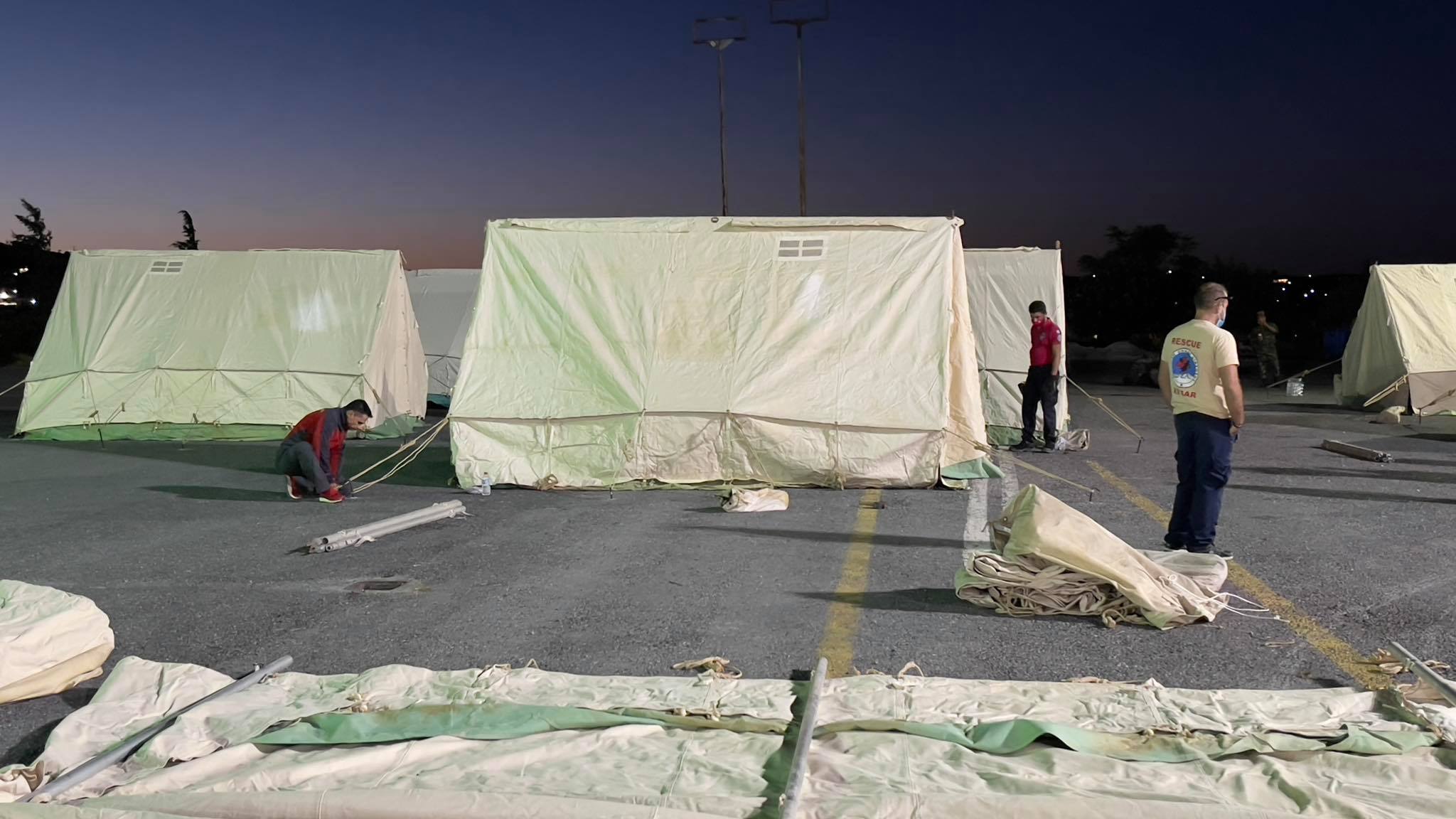 The inhabitants of Arkalochori spent yesterday night in 80 tents set up in the center of the village. At the same time, the government services immediately started assessing the condition of the buildings located in the area that suffered the most. As reported today at a conference in Arkalochori, 396 buildings have been estimated to date, 341 of which are uninhabitable. Only 55 of them were assessed as suitable for living. The condition of 17 schools in this area was also inspected. Their condition also leaves much to be desired. Only 8 of them can continue to function unhindered. 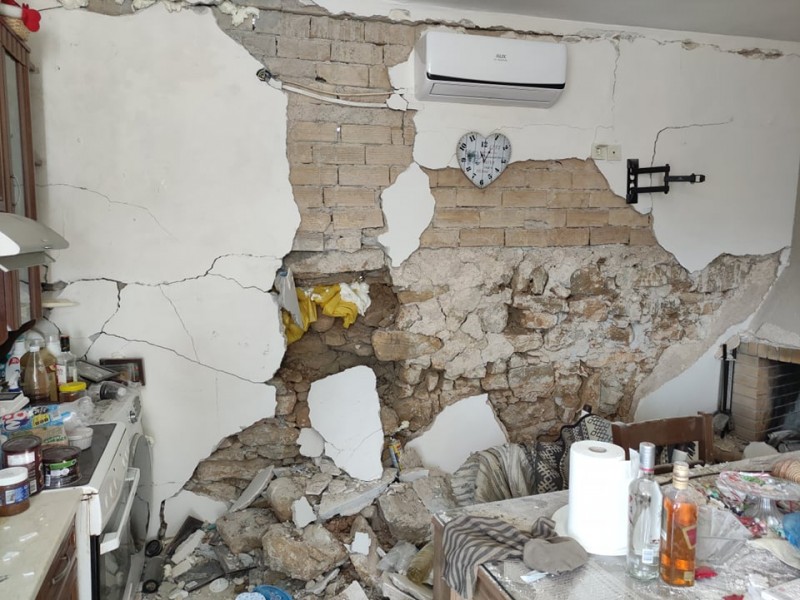 The inhabitants of the town of Houmeri, located near Arkalochori, also talk about the great devastation that today's morning quake made even worse. They estimate that 90% of the houses have been damaged enough to make them uninhabitable. Most residents do not know when they will return to their homes. 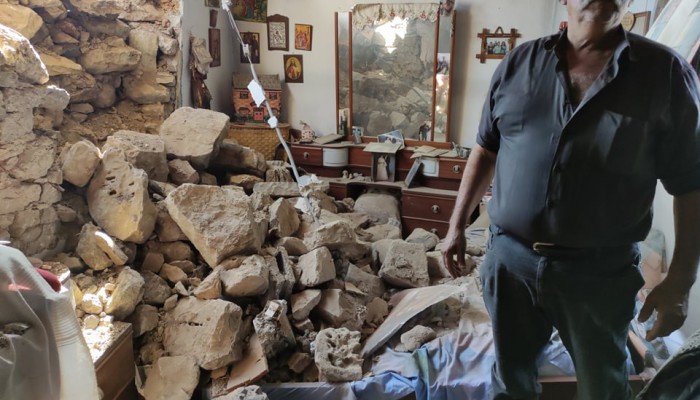 Unfortunately, as we wrote yesterday, it was not without the wounded. One man who was in the Profitis Illias Church in Arkalochori during the earthquake yesterday also died. It was crushed with a fragment of the dome.

Damage to the Minoa Pediada commune

Greek Prime Minister Kyriakos Mitsotakis flew to Crete today and visited Arkalochori and Houmeri, which were hit hardest by the shocks. The Greek government announced the transfer of additional € 1 million to the municipalities of Minoa Pediada and Archanes-Asterousia, which were most affected. A package of measures is also to be launched to support and rebuild the areas hit by yesterday's quake. 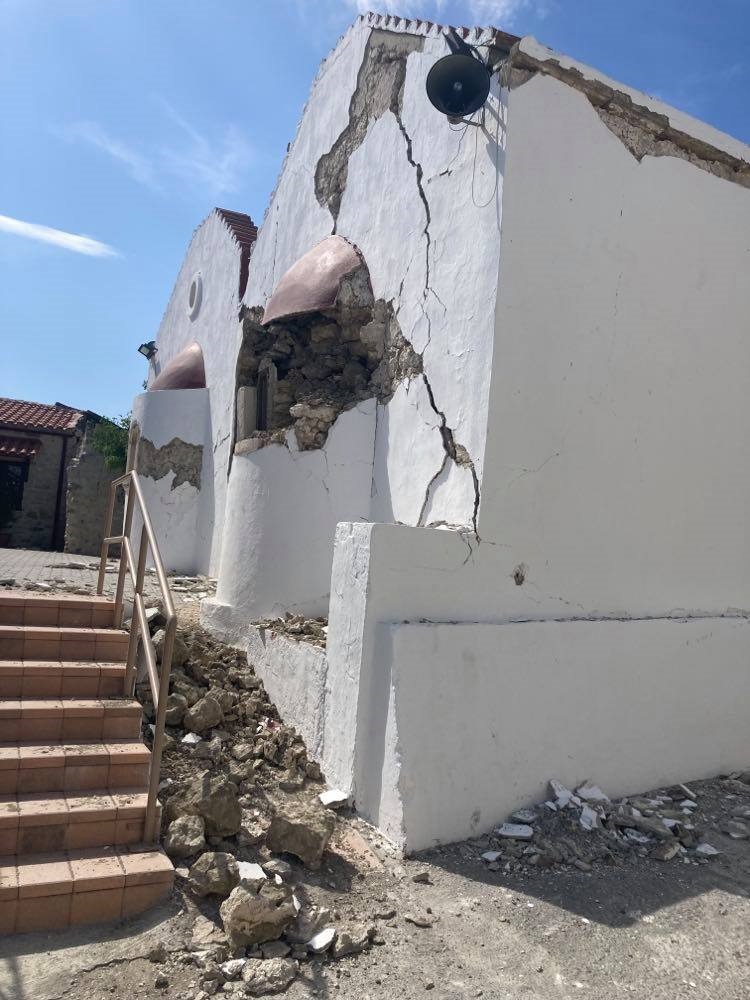 Unfortunately, the earthquakes in Crete are not new. The island lies in an active seismic area and shakes regularly. In general, however, these phenomena are so weak that they are practically not felt. In Arkalochori itself, regular tremors had been recorded for 4 months. Since June, as many as 2,670 have been registered. Nevertheless, seismologists say that they did not expect the strength of the shocks that occurred yesterday.

After yesterday's catastrophe, there are also critical opinions emphasizing the indifference of the authorities. It is alleged that none of the current governments and local authorities have taken the necessary measures that could mitigate the fatal effects of stronger earthquakes. Condolences and financial aid will not cover the indifferent policy of protection against the effects of earthquakes. Public buildings, including schools, are not controlled, so it is not even known if they are safe. Thousands of homes in Crete, including the Old Town of Chania and Rethymno, are extremely endangered during such shocks. Most of the buildings in these parts of the city are old stone houses, the construction of which, despite their solidity, is far from modern technologies that anticipate the operation of such elements.

Destruction in the village of Houmeri

An additional problem is the arbitrary alterations to the structures of old buildings. This issue was brought up by Karydis Panagiotis, Professor Emeritus of Anti-Seismic Design. He stressed that the old apartment buildings in Arkalochori had been turned into shops. Their owners demolished the walls on the ground floors so that shop windows could be created. This significantly weakened the structures of these buildings. In addition, over the thus created stores, new floors have been added, which constitute an additional burden. In the professor's words, this is probably one reason why so many buildings in the commercial part of Arkalochori have been destroyed.

Regardless of the causes, direct or indirect, the most affected people in the catastrophe are those who lost their possessions and homes. For these people, in Arkalochori and Heraklion, the collection of basic food products, personal care items, began. It is certain that the Cretans will remain united in the face of the misfortune that has struck part of their community. We all hope that, as announced by prof. Lekkas Efymis subsequent shocks will be weaker and less noticeable.

More photos from the destroyed areas: at this link .