In early July, we wrote about the completion of a road project connecting the most important beaches in the Agios Vasilios municipality. At that time, it was also planned to launch a new KTEL bus connection , which has actually taken off. A few days ago, we tested this new route and traveled a section of it between Plakias and Agios Pavlos by bus. Below you will find some important details and our impressions. 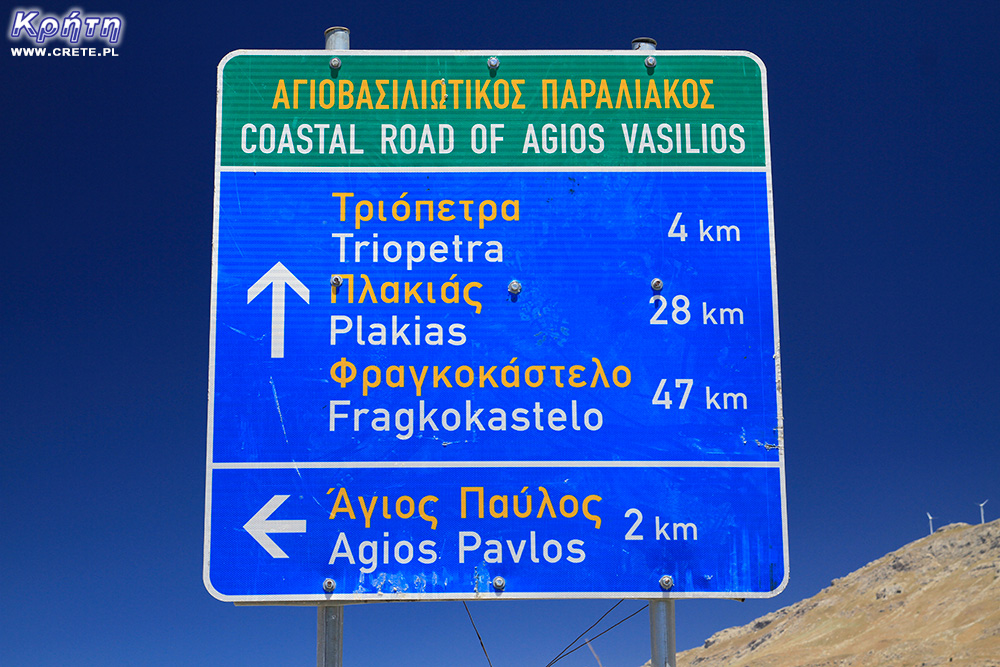 Characteristic marking of the Coastal Road of Agios Vasilios

The new tour started on July 15, as planned. Interestingly, we were looking for information on its launch and timetable on the KTEL website. Unfortunately, however, there were no such messages. Therefore, we did not know whether the project to start the bus had entered into force at all. We found the answer only at the bus stop in Plakias.

Only this information was stuck on the window of the ticket office. 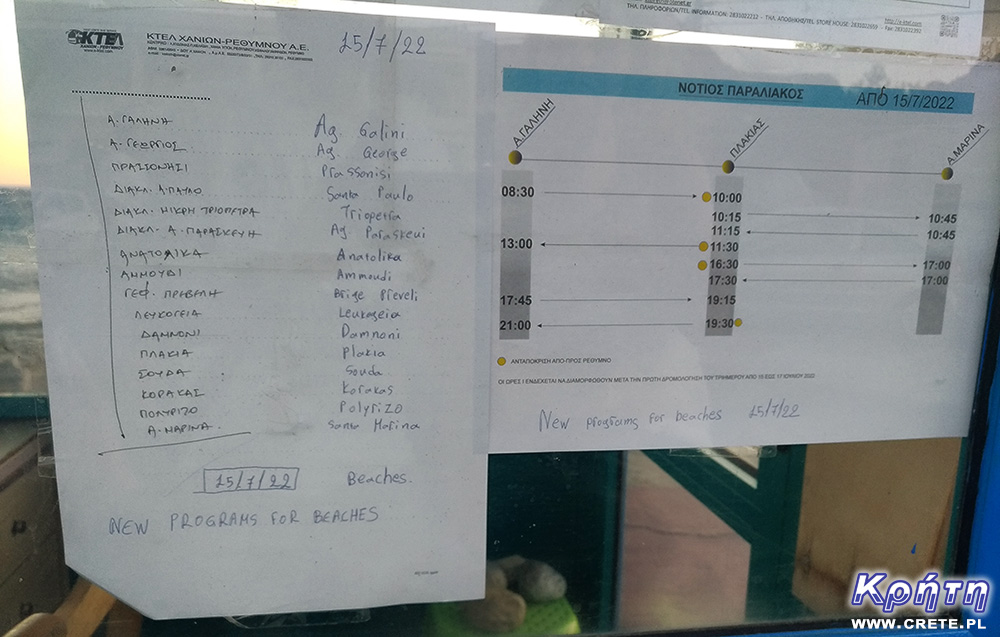 The route is handwritten in a pen, basic departure times, no more details. However, we decided that on Sunday we would go to Agios Pavlos, and then we would go on foot to Triopetra, from where we would return with the evening course to Plakias.

The first surprise in the morning: the bus, or rather a larger bus, actually arrived at the stop on time. Unfortunately the driver didn't sell tickets and sent us back to the cashier and the cashier back to the driver. The reason for this confusion was the lack of information in the ticket sales system about how much we should pay for making such a connection. In the end, the gentlemen chose one of the villages near Plakias and agreed that it would be more or less the same as the trip to Agios Pavlos. In total, we paid 5.10 € for the trip to Agios Pavlos and the return from Triopetra for two people. We found the price extremely attractive. So we got in and waited for other passengers who were ultimately not there. 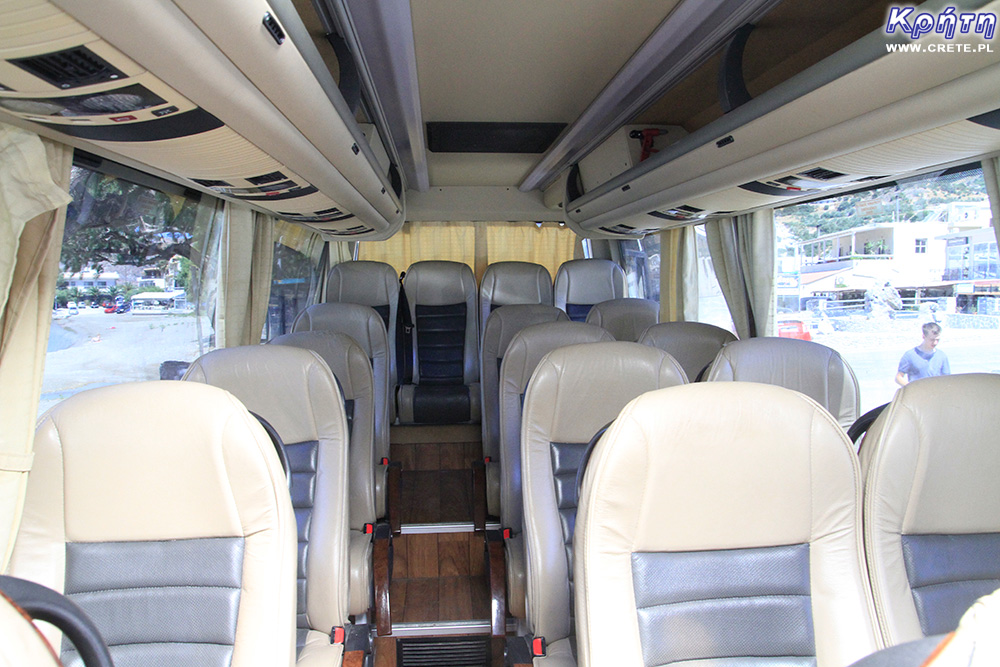 We were the only passengers

However, it seems that the launch of this new connection was not properly advertised and ultimately only a small number of people received information about it. It's a pity, because the journey along the Coastal Road of Agios Vasilios itself is extremely attractive. Among other things, the bus travels along a very steep and winding stretch between the Preveli Bridge and Ammoudi Beach. Then, for a long time, he follows the road that leads along the coast, spectacularly climbing the surrounding hills. If we had more time, we would certainly plan a trip in which we would cover the entire route of this connection.

The original plans we wrote about on our website assumed that the bus would run between Frangokastello and Agia Galini. Ultimately, however, most likely due to the lack of agreement between the municipalities of Agios Vasilios and Sfakia, the route was slightly modified. Currently, the bus runs on a route that includes the following beaches: Agia Marina (next to Koraka beach), Polyrizo, Koraka, Souda, Plakias, Damnoni, Leukogeia, Ammoudi, Anatolika, Agios Paraskevi, Triopetra, Agios Pavlos, Prassonisi, Agios Georgios, Agia Galini . We are very happy that Agios Pavlos was finally added to the list of stops on the route. However, you have to bear in mind that the bus does not go directly to the beach everywhere. Sometimes you still have to cover some distance on foot. 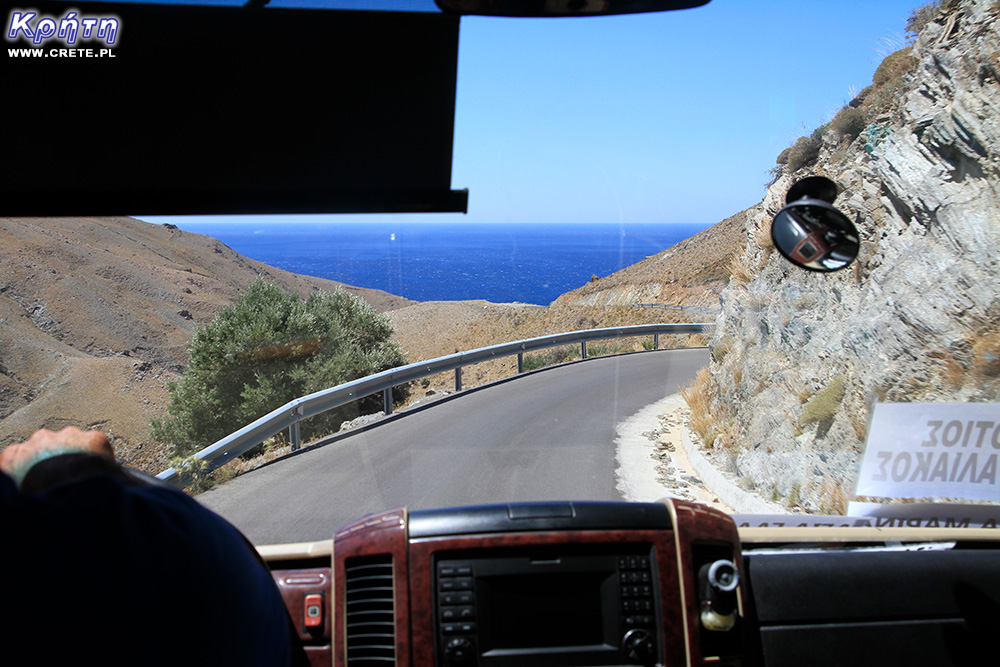 When choosing the purpose of your trip, remember to ask the driver where to wait for the return course and the approximate time of his arrival. Most of the stops on this route are unmarked and there are no detailed departure times on the plans.

In our opinion, the idea of creating such a route is great, but unfortunately it was not properly advertised by the commune. Especially this season, when it is so difficult to rent a car and it is also so expensive, such an alternative would surely please many people. After our first article on this topic, there were comments about how much this route has damaged the environment of Crete. We would like to reassure concerned people and emphasize that the road mostly runs along old gravel, which has simply been covered with an asphalt rug. As a standard, this road is far away even from local roads, and its width is often so small that cars passing by have to use the side of the road. Anyway, even the bus carrying out this connection was overcoming some turns and intersections, maneuvering 2 times. 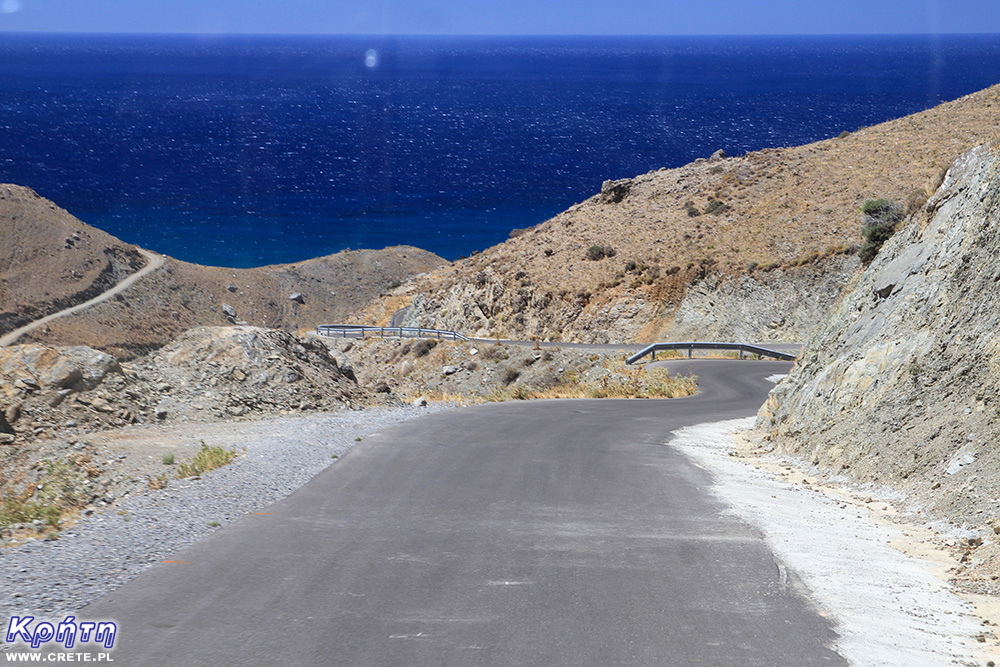 Such roads do not scare us, but if someone would like to drive a car on their own
this has to be taken into account as the road is narrow and steep in places.

Observing the traffic on this road, we noticed that a large part of the cars, judging by their age, condition and type, were those belonging to local residents. This road will therefore be used all year round by people living in this area. Anyway, the fact that it was needed by the inhabitants of Crete is that on the way back in the bus, an old lady traveled with us, who was extremely pleased that when going from Agia Galini to Souda, she did not have to use a transfer in Rethymno. 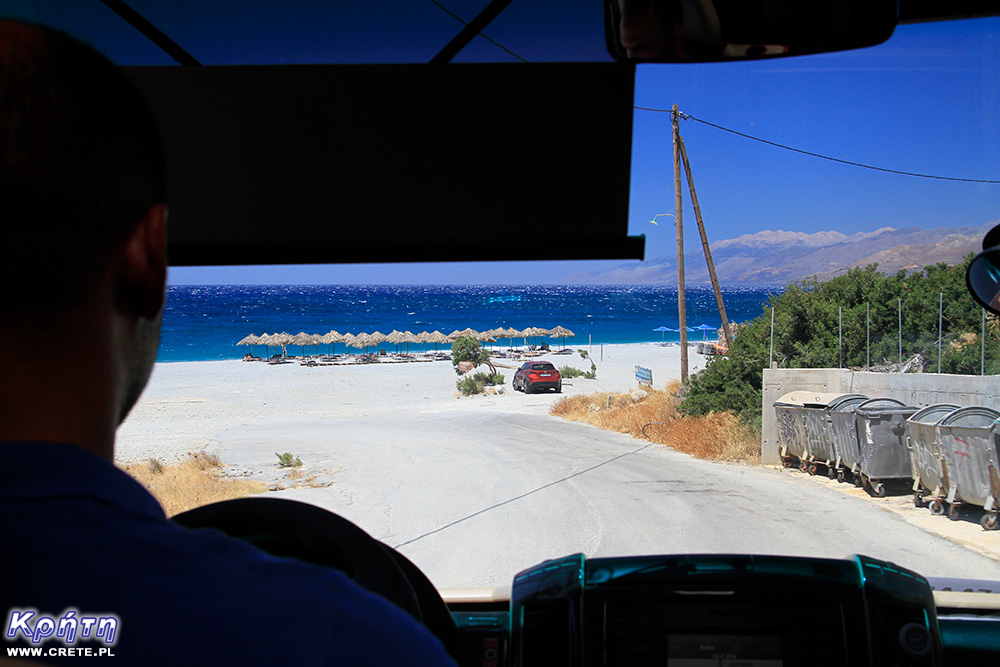 The next day we wanted to use this connection again to see one of the next beaches on its route. Unfortunately, we had an unpleasant surprise. As it turned out, the formula of this combination was changed at the last minute. It lost the status of a daily exchange rate and was reduced to only Friday, Saturday and Sunday. Even for this reason, if you are interested in using this connection, ask each time at the ticket desk whether it is implemented on a given day, what route it covers and how much the tickets cost. You can see that everything is still being added and modified depending on your interests and needs.