155th anniversary of the events at Moni Arkadiou

On November 8, 1866, Ottoman troops encircled the hill where the Moni Arkadiou Monastery is located. Cretan insurgents found shelter there, taking part in the battles against the Turkish occupier. Less than three hundred insurgents had the enemy army against each other, consisting of over 15,000. soldiers and 30 cannons. However, even such an overwhelming advantage could not force the Cretans to surrender without a fight. On that day, the Ottoman commander made his last attempt to persuade the insurgents to surrender. The shots from the Cretans, however, were the only response received by the messenger sent by Suleiman. This decisive retort was the signal to launch an assault on the monastery. 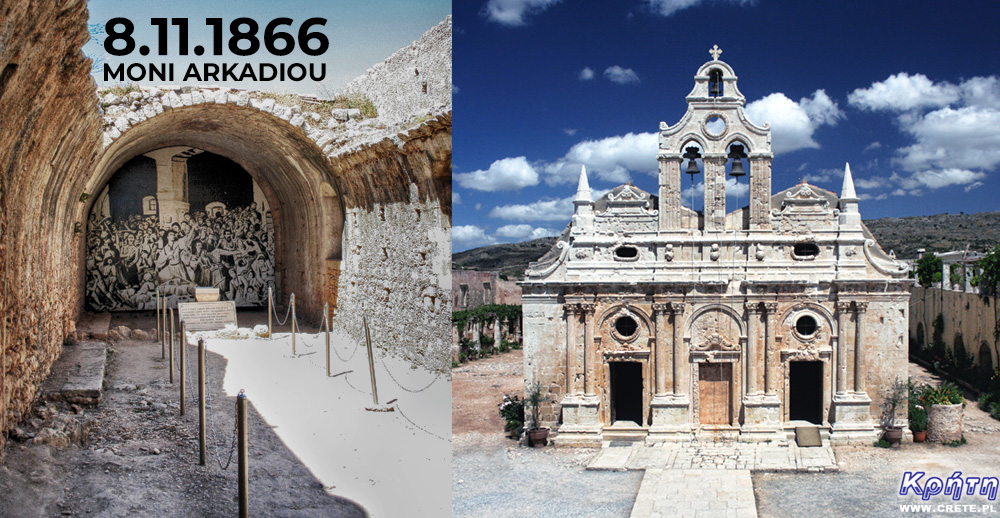 The high and well-secured walls of Moni Arkadiou gave the Cretan insurgents the opportunity to effectively defend themselves. Unprotected, the Turkish army suffered many losses. Despite repeated attempts to break through the barricaded door and burn the windmill occupied by the Cretans, Suleiman's forces did not manage to break into the monastery. As dusk fell, the Turks suspended their combat operations. At night, the Cretans made an attempt to fetch reinforcements. Two messengers, dressed as Turks, were sent to Amos for help. However, due to the fact that all access roads were blocked by Turkish troops, any help was impossible.
In the evening of November 9, the fight started again. Turkish artillery, reinforced with two heavy cannons pulled from Rethymno, destroyed the entrance gate to Moni Arkadiou and allowed Suleiman's troops to enter the monastery courtyard. Running out of ammunition forced the insurgents to bayonet fights with the Ottoman soldiers breaking inside. The defending Cretans were pushed into two rooms where gunpowder was stored. Insurgents gathered in one of the warehouses, wanting to avoid surrendering to the Ottoman troops, set fire to the barrels with gunpowder, causing a great explosion, which killed most of the Cretans in the monastery. It was this last tragic episode of the defense of Moni Arkadiou during the Cretan uprising that made this monastery so strongly inscribed in the history of the Cretan struggle for independence. Today, 155 years have passed since those tragic events.