Today, Greece is celebrating Epiphany, or the Epiphany, which now officially ends the celebration of Christmas. Normally, on this occasion, religious ceremonies are organized, which are crowned with blessing the water and catching the cross from the water. However, due to the prevailing pandemic restrictions, everything was different this year. Initially, the churches were to remain closed on that day. However, this did not happen, because the Greek government gave way on this issue and allowed them to be opened. Of course, this was allowed with limited attendance and other security measures. Police patrols appeared in front of the churches in order to prevent excessive crowding.

The uniqueness of this year's Epiphany was emphasized in the clip above by Up Stories. The film was made in collaboration with the leading director Fotis Passos.

There is an interesting tradition of blessing water associated with Epiphany. If it takes place over an open water reservoir, at the end of the ceremony the priest throws a cross into the water, which is picked up by daredevils who are not afraid of cold water. As the one who fishes the cross is said to be particularly lucky all year round, there are usually people willing to compete in this competition.

This year, however, the ceremony was abandoned in the open air. The consecration of water took place only symbolically in the temples. In Anogia, Crete, in addition to water, traditional bells were also devoted to the best animals in sheep herds. It is an old custom, forgotten in other regions, but still cultivated in Anogia. " A lonely life is the life of a shepherd who lives in the mountains of our region, on the slopes of Psiloritis, in the Nida and on the snowy peaks of the mountains. A life that brings him close to God with whom each shepherd develops a very special relationship ." 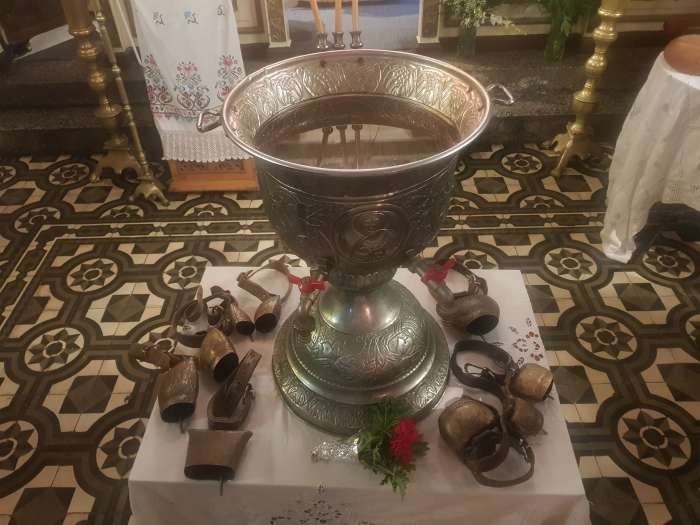 The photo comes from flashnews.gr

The ban on sacrificing by the sea and rivers caused some citizens to take matters into their own hands. On one of the beaches in the area of Chania, a few of the faithful organized such an informal consecration of water, ending with a dive in the water to the symbolic cross.

In other places, a few priests have gone to the water themselves and blessed it. In Thessaloniki, members of the United Macedonians also did not want to give up this tradition. However, shortly after the cross was thrown into the Thermaic Bay, the police intervened.

The Feast of Epiphany was established in memory of Jesus' baptism on the Jordan River, therefore the name of the Baptism of the Lord is also used in relation to this holiday. In the Greek Orthodox Church it is celebrated in a rather special way. Of course, the form of rituals and customs accompanying major religious ceremonies may be slightly different depending on the area of Greece.

The Christmas atmosphere prevails the day before, on January 5. On that day, the faithful go to church, the tables show Lenten dishes, and the houses (and others) are visited by the priest who sanctifies them.

On January 6, the faithful gather in churches for the Divine Liturgies, i.e. the equivalent of the holy mass according to the Liturgy of St. Basil the Great. Later, they go in solemn procession with the priests towards the sea or other accessible body of water. In small villages away from the sea and other open water bodies, vessels of water are simply placed in temples. The culmination of this celebration is the consecration of water. After reading the prayer from the liturgical book, the priest immerses a wooden cross in the water three times

In Greece, if the celebration takes place over an open water reservoir (sea, river, lake), the ceremony is more spectacular. The priest throws the cross into the water three times. It is tied to a sash, so after the first and second throws it is pulled out by the priest. Only the third time, as a sign of the ritual cleansing of the soul, willing men jump into the water to catch the crucifix.

Although the beginning of January does not inspire anyone to swim in the sea, on this day there will always be a group of daredevils who will gladly jump into the water. The one who fishes the cross first will enjoy happiness and blessing throughout the coming year. The rest of the swimmers usually take turns kissing the fished crucifix. The celebrations end with the release of white pigeons from above the consecrated water.

Depending on the region of Greece, the main ceremonies are enriched by additional local rites, e.g. throwing oranges into the water, washing icons in blessed water, agricultural tools. On this day, fasting no longer applies, so meat dishes appear on the tables. In Crete, an old, rather forgotten, culinary custom was to prepare a dish called fotokoliva ( Φωτοκόλυβα ). This dish was prepared on the eve of Epiphany. This is a type of soup made of various legumes. It was eaten the next day and fed to animals. This was to ensure good health and wealth in homes. Chickpeas, wheat, lentils, fava beans and regular beans were used to cook Φωτοκόλυβα . It was served with lemon and Cretan olive oil, and garnished with fresh onions and dill.