Everyone probably knows that Crete is a large island. When you come here for the first time, you will definitely not see all the interesting places, because the distance between individual attractions is in some cases quite a lot. Of course, there are tourists who do not plan to return to the same places, so during one stay on the island they want to see as much as possible. To these people, we recommend our articles such as Top 12 Crete and Top 20 beaches , which in a nutshell show the most famous places of Crete.

But there is also a large group of Crete admirers who have swallowed the mole-buckthorn and return to the island once again with the intention of getting to know the region in which they have accommodation more closely. 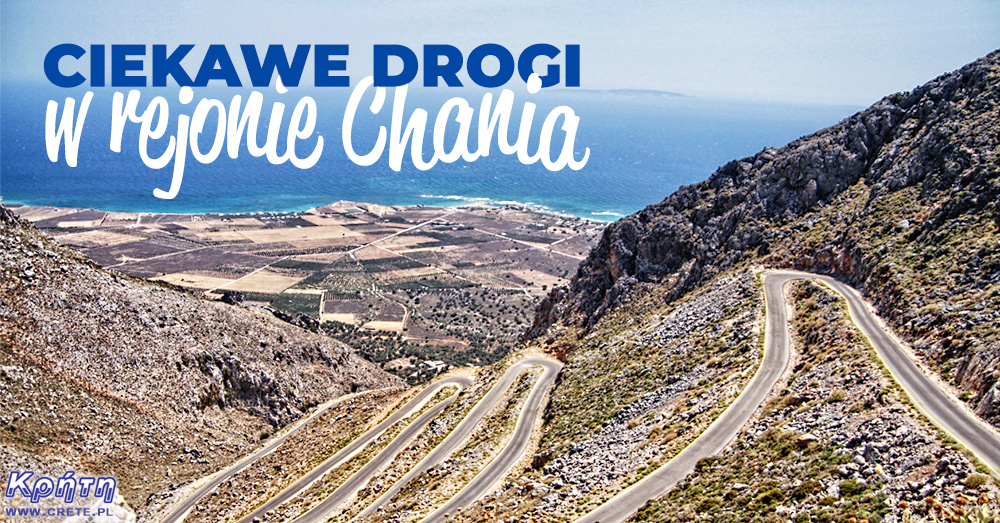 Therefore, today we are starting a series of what can be described as " interesting places nearby ... " in which we will show you thematically divided points of interest located in each of the Crete prefecture. These will be both well-known and popular places, but we will show you less typical suggestions, which in our opinion are also interesting. Of course, it is impossible to describe everything interesting on the island, so it was necessary to make a preliminary selection. So these will be our subjective types, but if you know other interesting places that you would like to recommend to others, just enter them in the comments, of course referring to the published category. As this topic grows larger, we will probably create a special space on our website where you will be able to easily find all the articles created within this series.

As the first topic, we chose interesting roads located throughout the Chania Prefecture . To make it easier to find the described places, we have also developed a google map with markers. The roads we have chosen for today's part are paved roads. We do not expect to describe the unpaved ones (possibly in a small amount), because when you rent cars at local rental companies, you know well that damage caused on such roads is not covered by insurance.

The roads described below are marked on the map

Between the villages of Kallikratis and Kapsodasos there are some of the most spectacular serpentine in Crete. We recommend it to drivers who feel confident behind the wheel and are aware of their skills. The turns are tight, the drop in altitude is considerable, so it is easier to leave the serpentine than to drive under it. Nevertheless, this road is very spectacular and without any barriers. 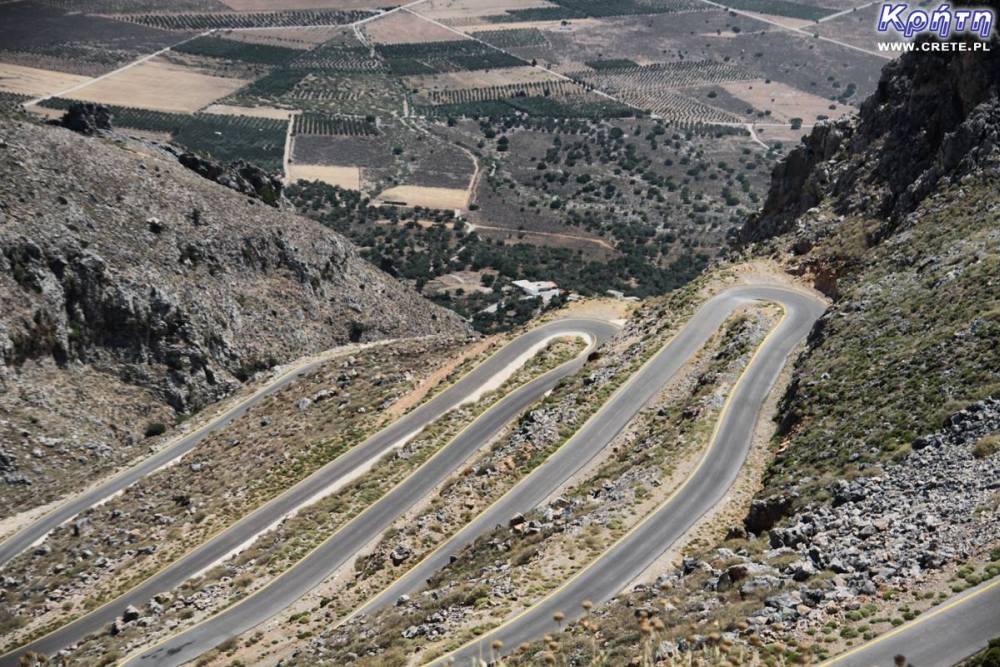 It is undoubtedly one of the most beautifully led serpentine in Crete. Its additional advantage is the very good quality of the road. The road is wide, the turns are well developed. While driving, you just have to watch out for goats and stones on the road. Of course, if you go up, to see this phenomenal view you have to get out of the car and look down. 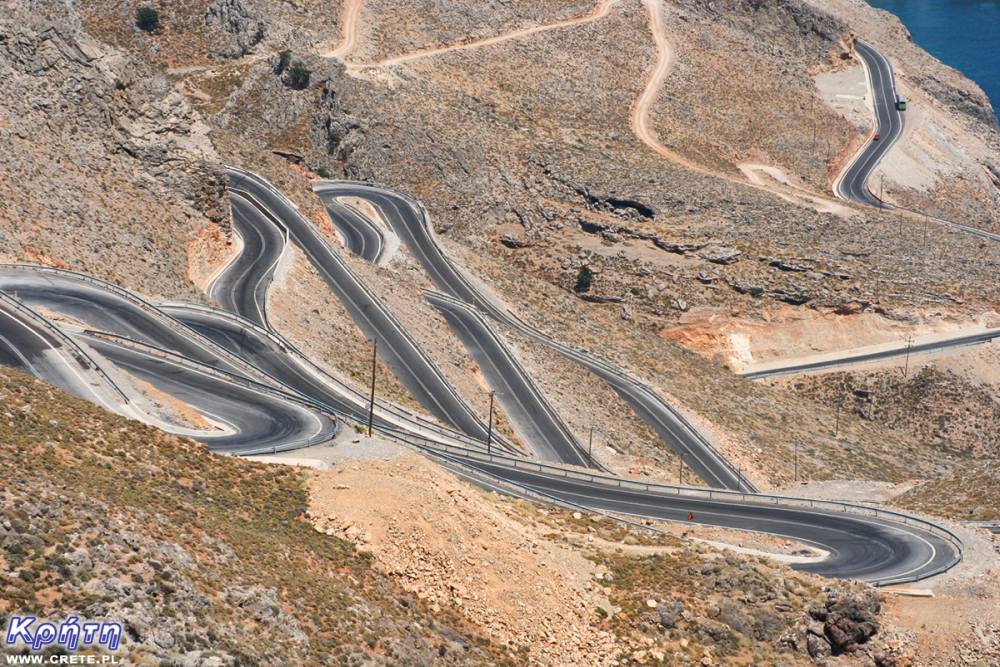 Bridge over the Aradena Gorge

The bridge over the Aradena Gorge connects both walls of the gorge. The ride on it is a great experience, especially for people who encounter such a crossing for the first time. However, the seemingly fragile crossing even withstands the weight of the bus. 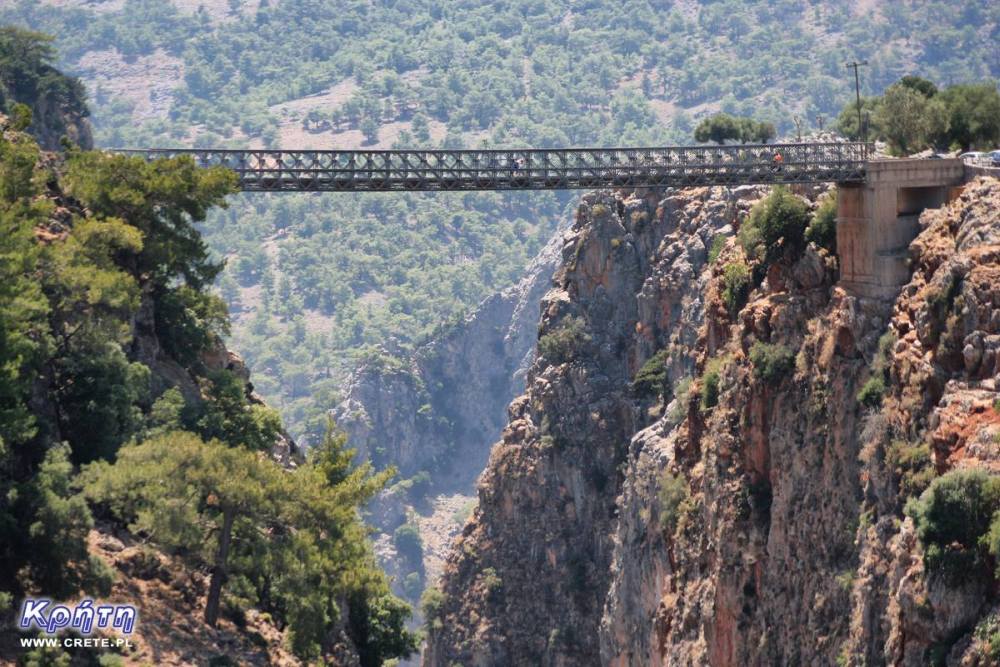 The road and tunnel run through the Topolia gorge

The road along the spectacular Topolia gorge was led through a tunnel in one place. It may seem small, but in reality it is used by coaches returning from Elafonissi. The traffic is swinging, so wait for the green light before going. 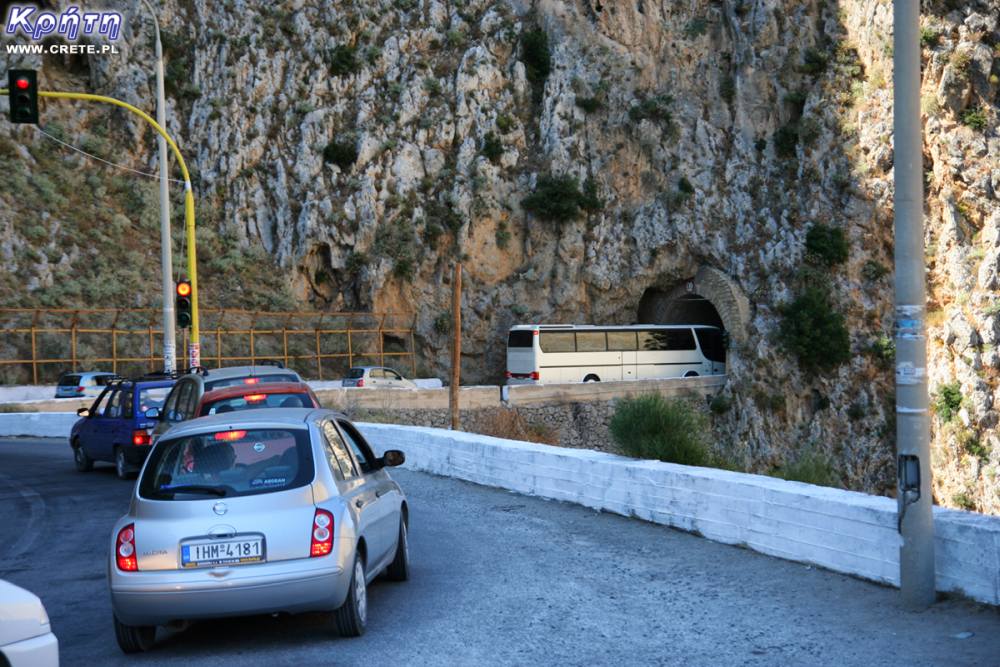 The road along the west coast of Crete towards Elafonissi

The road to Elafonissi beach is one of the most picturesque routes along the west coast of the island. It is of standard Cretan width, which is not very impressive and very winding. Some people mention it as "terrible", although we don't really know why :) 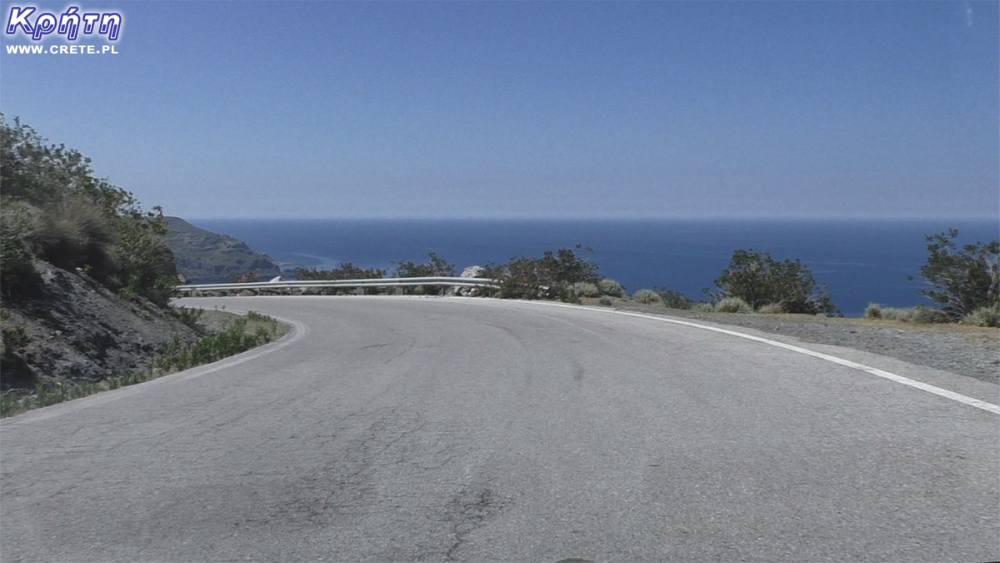 The road from the Imbros gorge towards Chora Sfakion

The road from Imbros Gorge to Chora Sfakion can literally make you dizzy. However, the prize is amazing views very characteristic of this region of Crete. Going down the winding serpentine, we see one of the most beautiful fragments of the southern coast of Crete. 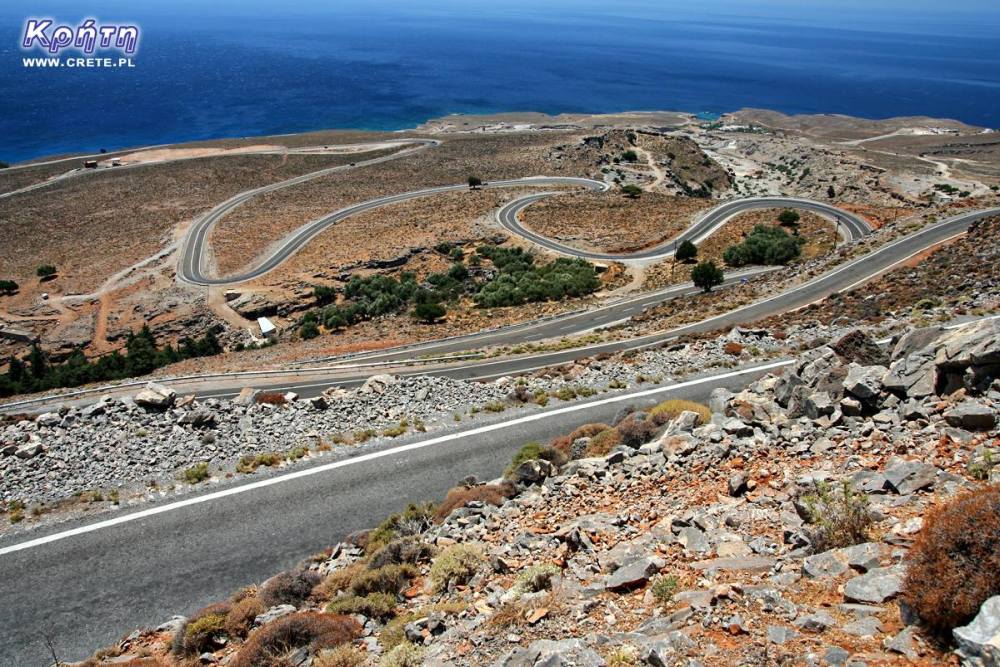 The road around the Omalos plateau

Omalos is a plateau located in the White Mountains at an altitude of about 1100 m above sea level. There is a road around it, which you can and it is worth visiting. Omalos is not only a starting point for exploring Samaria and many nearby peaks, but also an important agricultural area of Crete. The views here are amazing, and the road around Omalosa is just like in the attached photo. We recommend it due to the beautiful landscape and proximity to the mountains. 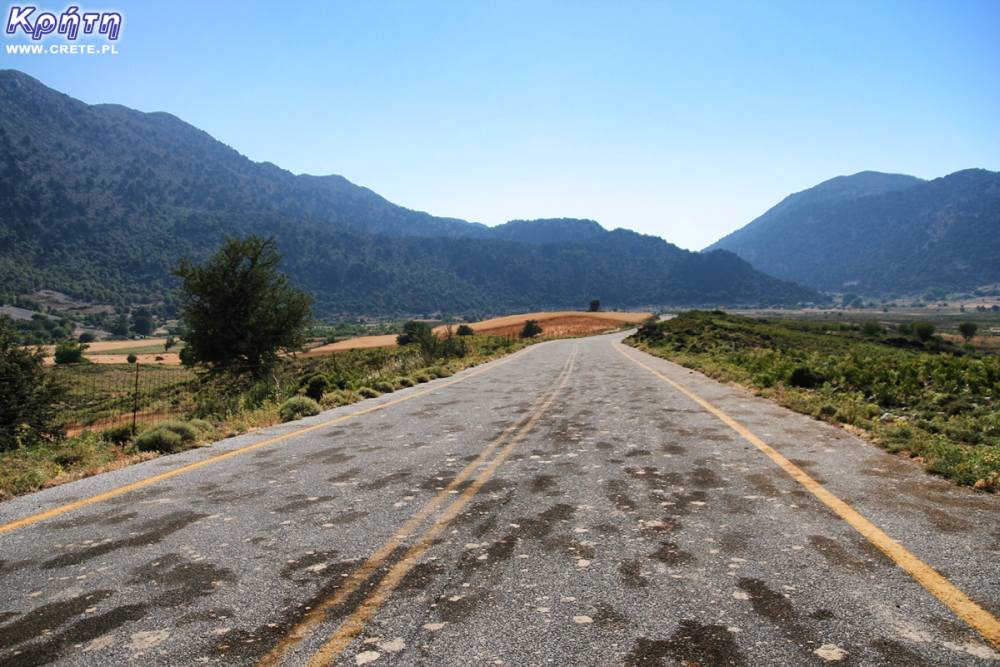 It is a narrow mountain road that connects the villages of Paloochora and Sougia with the Omalos plateau. It makes the greatest impression on us when we drive it very early in the morning. The first rays of the rising sun emerging from behind the mountain peaks shyly peek into the windows of the KTEL bus, which is climbing ever higher, carrying passengers to the Omalos plateau. Incredible light, clearly perceptible coolness that accompanies an early morning in the mountains emphasize its character. 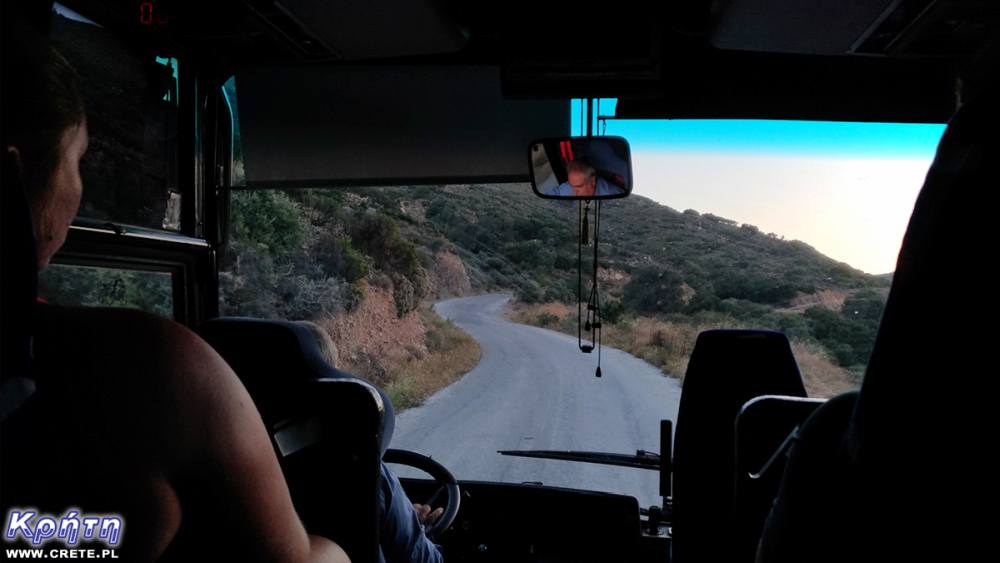 The road leading through the Theriso gorge

This is probably the only gorge in Crete, the crossing of which is possible without getting out of the car. So you can say that it is a gorge for the lazy ;-) Nevertheless, the gorge is beautiful, and on both sides of the asphalt road there are vertical slopes. The beginning of the gorge is in the village of Therisso, which played a big role in the history of Crete. Thus, the ride through the gorge can be combined with a tour of this village. 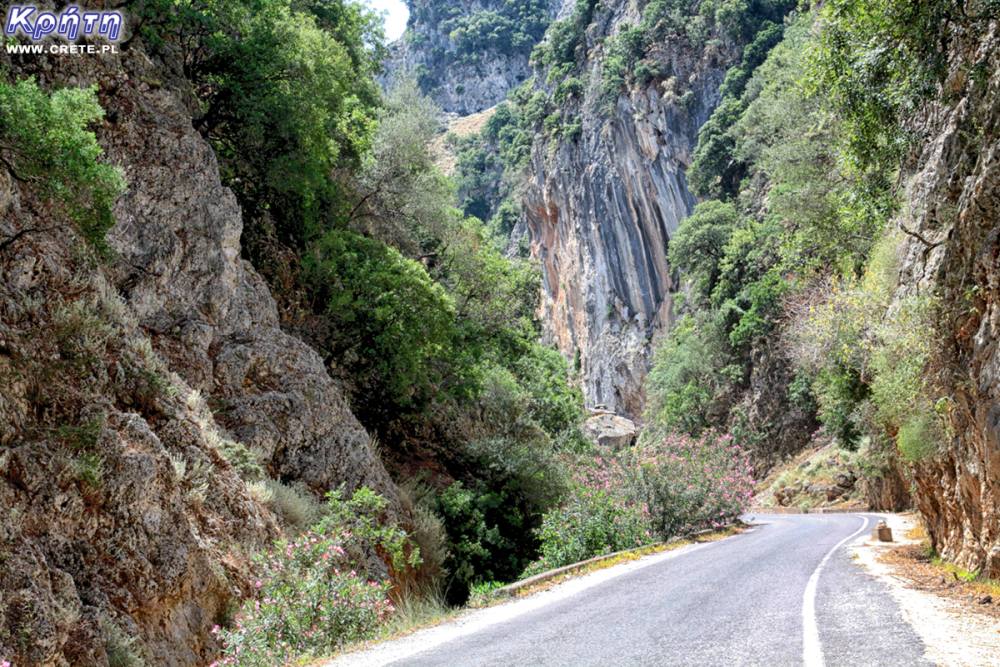