Kreta ›
What to see in Crete ›
Archaeological finds in Crete ›
Pitos, or an ancient barrel

Anyone who has been to Crete for a while and visited the Minoan palaces in Knossos, Phaistos or Malia, had the opportunity to face huge clay pitos. Great, often reaching the height of modern man, decorated in various ways today, become the main motive of many commemorative photographs taken by the astonished tourists. After the first surprise caused by the size of this clay jar, several questions arise in the head. What were they used by the Minoans, how did they handle their emptying? Some pitas seem to be too powerful and heavy at first glance so that they can be moved, so the question arises how they were transported? It may also be interesting to know how to make them.

An interesting theory about the pitots found in Knossos was created by Erich von Däniken, who thinks that "... pitons from Knossos were tanks for fuel for ships, which the gods flew to have sex with their priestesses". You must admit that this theory is very interesting ... but it is difficult for us to agree with it, so we will stop in the meantime on scientific knowledge. 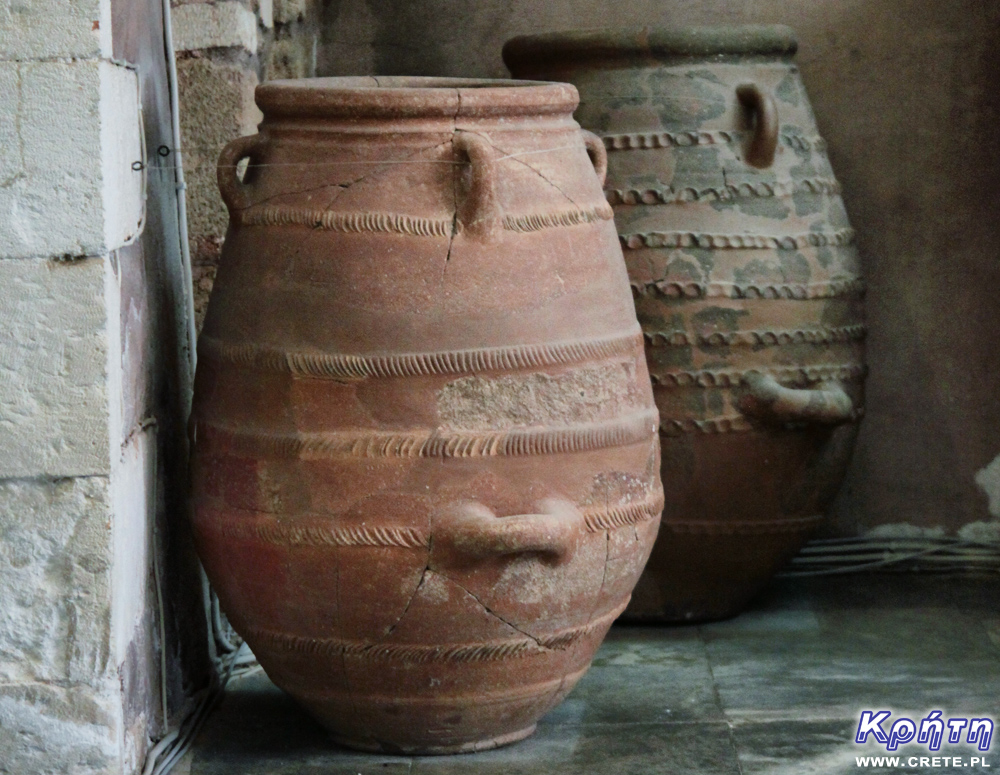 The weakness of the Greeks to these gigantic forms has survived to the present day. To this day, there are potters in Crete specializing in the creation of such giants. It is from them that one can learn about the method of creating the largest pitos. It is true that contemporary specimens are not as richly decorated as the ancient ones, but they are also currently performing different functions than in the times of the mythical Minos. They can be spotted even in a large part of home gardens, where they are inserted for ornamental purposes. Modern Greeks treat them as huge pots in which they grow plants, for example olive trees.

In ancient Crete pitons had completely different, more practical tasks. The Minoans used them mainly in storage rooms for storing liquids such as oil, wine or various types of plant products. Large sizes meant that pitons were used during the burials of the dead acting as coffins. This was confirmed by the archaeologists who repeatedly found human bones in the middle of earthen colossi. 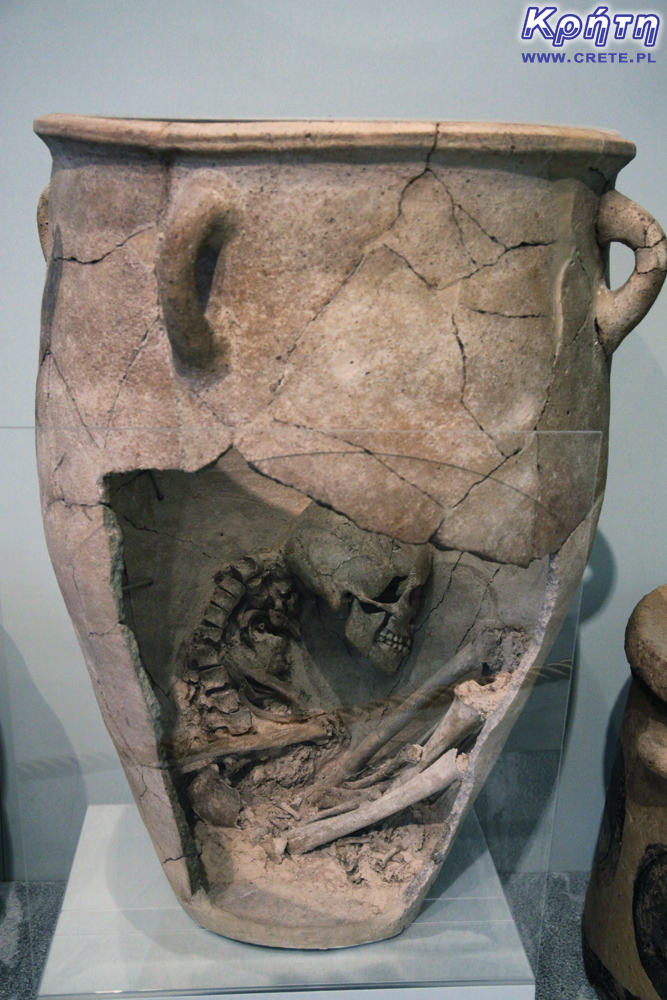 Pitos filled with flammable oil for lamps could also perform defensive functions during hostile assault on the palace, but this weapon was double-edged and probably more than one of them burned because of this ...
The appearance, shape and material of which ancient Minoans pit pitchers were always similar. A huge jar made of clay, often with a height of a man with a wide opening at the top, which ended with a smoothed semi-slip edge. The outer walls of the Minoan pithoi were straight or curved and usually covered with decorative floral or marine motifs. On the side edges you can also see small characteristic "ears", often arranged in two or three rows. In warehouses, where pitos were stored, food was also placed on separate plates with identification markings to facilitate orientation in this "pantry". 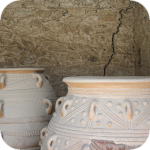 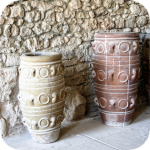 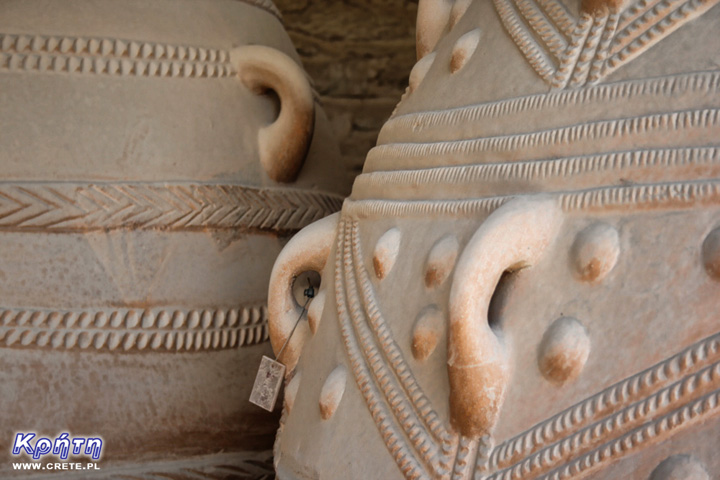 Capacity and weight of pitos

If you ever wondered how much it could fit into one such "jar", you were not the only ones who asked yourself this question.
In 2003, John Younger set up the computer program "Vase" to calculate and decided to look for answers to questions about the volume of pitos. For the first calculations, he used a 1.7 meter high, which was found in Epano Zakros. On the basis of the given height and the pitosa profile drawn, the computer simulation calculated a maximum volume of 996 liters. This result is fraught with a mistake because the program was used to calculate itand the external profile of the vessel. Assuming that a liter of water has a weight of 1 kilogram, we have a pitched weight of about a ton! And yet it was not the largest of the found specimens.

From among the other pitas studied, the largest recorded capacity that the program has calculated had a copy that could hold as much as 1430 liters. In studies carried out by other scientists, volumes were obtained whose hypothetical weight was above 2 tons. Even if these pitons were filled with dry goods with a density less than water, wine or olive oil, they still gained considerable weight. In addition, the weight of the pitosa itself should also be taken into account. Even a small, empty pitos with a capacity of 293 liters, weighed about 120 kg. So what was the biggest weight? Large volumes and the weight of the largest pitos completely prevented any manual handling and the ability to move them from place to place.

Pitos as for those times, however, were a convenient way to store food that was produced and exported throughout the Mediterranean.
It is obvious that the largest pitos were not used in the transport of goods. For this purpose, a special version was designed and created, which could be immobilized on the ship by means of ropes and special handles or racks. The walls of these pitos rarely covered the decorations and were usually smooth. 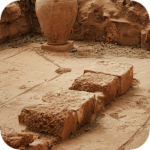 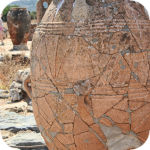 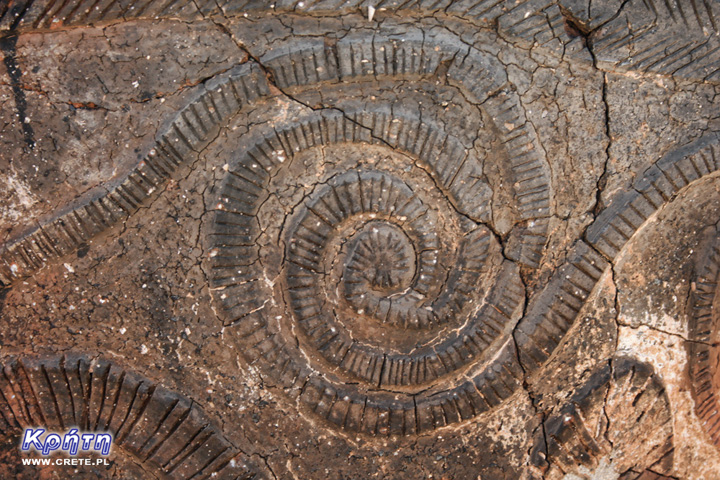 The main picture shows the ornamentation of pitos found in the palace in Malia.
Photos in the gallery depict pitchers and warehouses
with characteristic grooves enabling the recovery of spilled liquid.


The manner in which ancient pitos were transported with contents can be seen, for example, in the Museum of Underwater Archeology in Bodrum, Turkey. Remnants of transport from the sunken Sheytan Deresi and Uluburun ships are transported there, which transported, among others, pitos filled with Greek goods.

Unusually pitios' capacities were used by palaces that collected, stored and distributed food among the local community around it. The administrative functions of the Minoan palaces are confirmed by extensive magazines. For example, the ones in Knossos consisted of 18 rooms, in which 420 420 pitios with a total capacity of less than 250,000 liters could be collected as calculated. Sometimes the warehouses were built so cleverly that the waste of spilled oil was limited to a minimum. In the magazines of the palace in Malia, a special channel was guided, ending with a hollow. So if one of the pitos stored here would be broken, the oil or wine would flow into this channel and then to the end of the cavity from which it was possible to select the liquid. In addition, the warehouses were constructed in such a way as to provide pitosom with the greatest possible stability. For this purpose, they were placed in matching holes located in the floor or even placed directly under the floor. 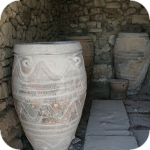 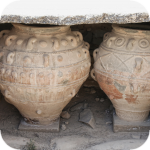 How to get to the stocks stored in the middle of pitosa?

Entering larger pitos in the floor certainly made this task easier. In the case of smaller standing vessels, terracotta stools, to which minoans were entering, were helpful to get the goods stored inside the pit pit. However, how to get to the cereal located on the bottom of the vessel, so as to completely empty the pitosa from the old stocks before pouring new ones?

Helpful in this were the rows of "ears", which you certainly noticed on the outer walls. At first glance, they are disproportionately small, but their size made them harder to break. Through these ears a rope was threaded through which pitossos could be tilted. The more he was emptied the more it had to be tilted so as to get to the content.

As we already mentioned at the beginning today, large pitios are also produced, although at present they do not have storage functions, but decorative ones. We found one of these potters specializing in creating pitos in the village of Thrapsano. We learned from him how the production of such pitosa looks like. First of all, to create such a large vessel, you need a special kind of clay, which occurs only locally, so not every potter has to do itsteppe. Pitos are created from two or three separate parts that are joined together at the end of the creation process. Decorations that the potter applies to have, among other things, the task of masking the contact lines of individual parts. If you will ever be in the Thrapsano area, you will definitely visit Michalis' workshop! The army of clay colossos drying at his workshop is clearly visible at the end of one of the roads leading to Trapsano, so it's hard to miss.

The Fajstos disk is made of clay and has a diameter of about 16 cm, and its thickness varies between 16 and 21 mm. Its both sides (A and B) are covered with groups of repeating 45 characters arranged in a spiral, totaling 241 (although some sources give 244). It is not known which of the parties is the first and which is the second, and what is the correct direction of "reading" the inscription - from the inside or from the outside.