A lot of people who are going to Crete for the first time are asking us what to see. Limited time of stay and car rental, as well as a finite amount of funds for sightseeing cause that among the many interesting places offered by the island you have to choose only the most important ones. So we decided to create our peculiar " must-see, " or list of places we like the most known and most popular among tourists. Of course, this guide does not include all places worth seeing. You will find niche and less known on our website, where we systematically write what we saw. If you do not manage to see them during your first stay in Crete, it is worth leaving them for your next vacation.

Using the list, however, you must remember that Crete is a fairly large island, and "hits" are scattered practically all over its surface. If your hotel is located in, for example, Hersonissos or Agios Nikolaos, you may not be able to include Elafonissi or Balos in your plans because of the large distance. The number of miles that will have to be traveled to get to these places will be synonymous with the fact that you will spend most of your day in the car. Relatively little time will be left to appreciate the charms of the place you want to get in peace.

The situation is even more difficult when you do not plan to explore the island by car or motorbike. The use of KTEL connections is comfortable and quite fast, but only when it comes to moving between the main cities of Crete. Getting to smaller towns means sometimes having to make even a few changes, which often have to be added in time. It is also worth remembering that KTEL buses reach seldom (1- 2 times a day) to small villages and towns far from the main tourist areas. In this case, it is difficult to plan remote access and return the same day.

At each of Crete's main attractions we have provided approximate distances from the most important cities of the island. As starting points, we have established city centers instead of their perimeter. This will allow you to orientate, for example, whether such access is sensible. A place too far from the base is worth leaving for another time :)
We could not decide which places should be at the top of the list as the most important ones, so we arranged them all alphabetically.

The characteristic landscape of the Balos lagoon often appears in various types of folders and publications as a kind of visiting card of Crete. However, it does not arouse greater astonishment, as it is one of the most famous Cretan beaches, which cyclically occupies high positions in various rankings of European and world beaches. It is worth coming here, provided that your hotel is located no further than in the vicinity of Rethymno. To get to Balos and the island of Gramvousa you have to take a ferry. During the tourist season, ships depart from the port of Kissamos at 10:20 (return: 17:45), 10:40 (return at 18:00). In July and August an additional cruise is performed at 12:30 (return 19:30). The cost of a single ticket is 27 € (discounted 13 €).

The Balos Lagoon can be reached by car. When choosing such a trip, however, you must take into account that: 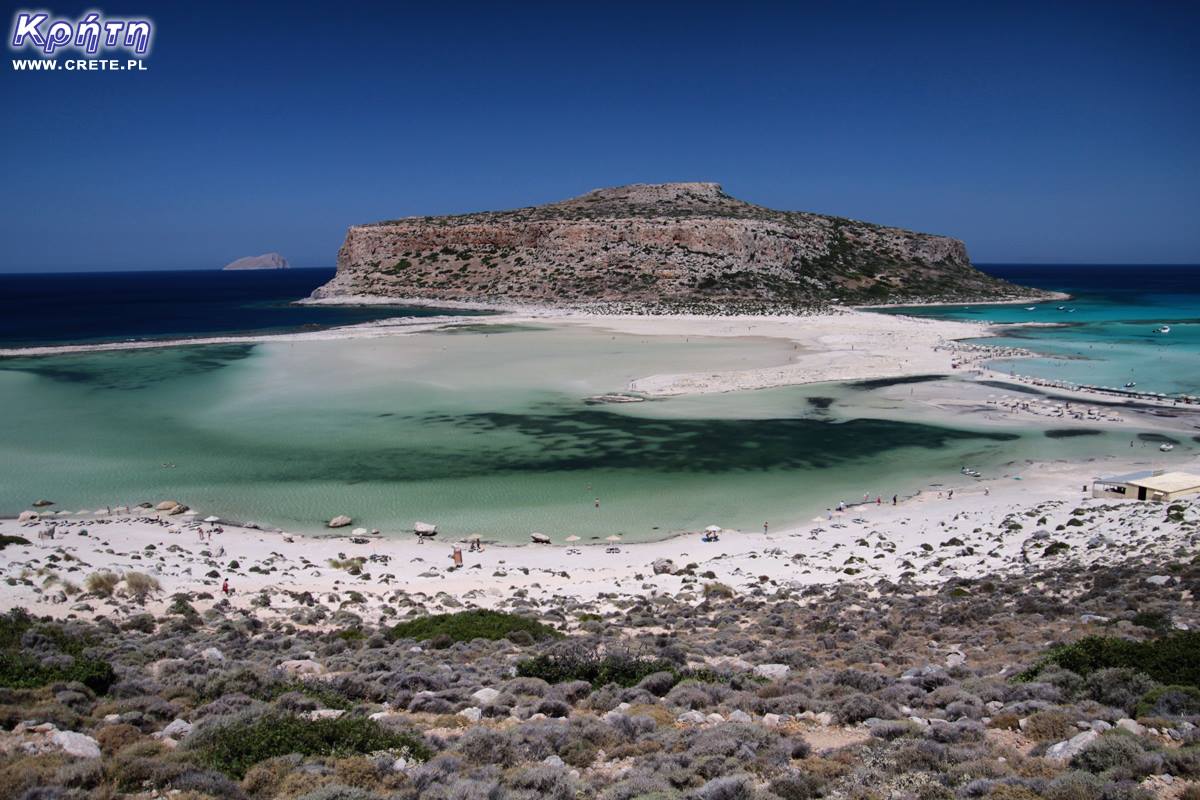 The Venetian port and picturesque Star alleysThe ego of the city attracts hundreds of thousands of tourists every year from around the world. In high season, it is very crowded here both during the day and until late at night. If you would like to see Chania, it is worth planning a trip so that you have a few hours to sleep in the dreamy pace between beautiful colorful tenement houses and to visit some important places. When coming to Chania by car, you should also remember about paid parking and problems with finding free parking spaces. The very center of this city is a thicket of one-way streets, where it's easy to get lost. 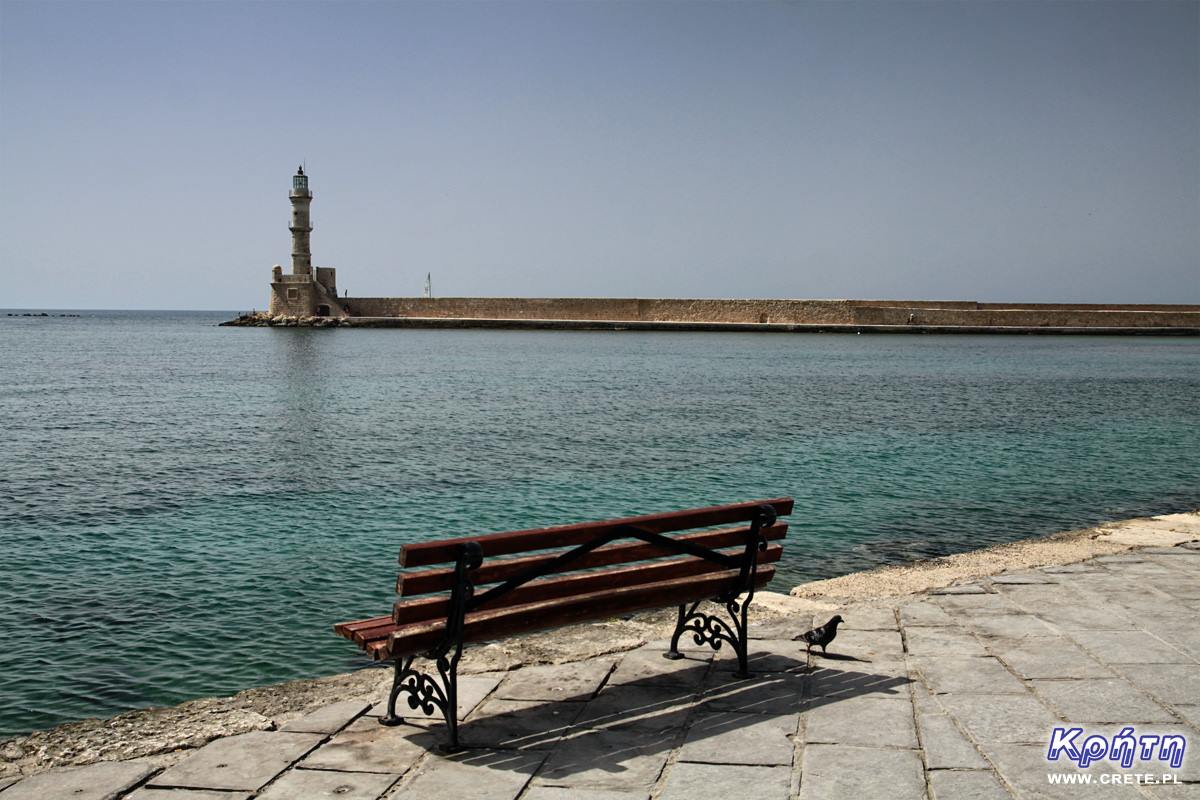 Elafonissi is the second flagship beach of Crete. There is no agreement among tourists whether Elafonissi or the Balos mentioned above are more beautiful. Regardless of personal preferences Elafonissi is constantly present in the rankings for the most beautiful beaches of Europe and the world. Pink sand, which occurs here, fabulous water color and warm shallow water, attract very large numbers of people every season. However, the beach is large so you can come without any worries. Everyone will fit, at most for the latecomers there will be no sunbeds ;-) Parking for cars is free and quite extensive. However, around midday and at weekends, it may happen that you will have to look for a free place on it. 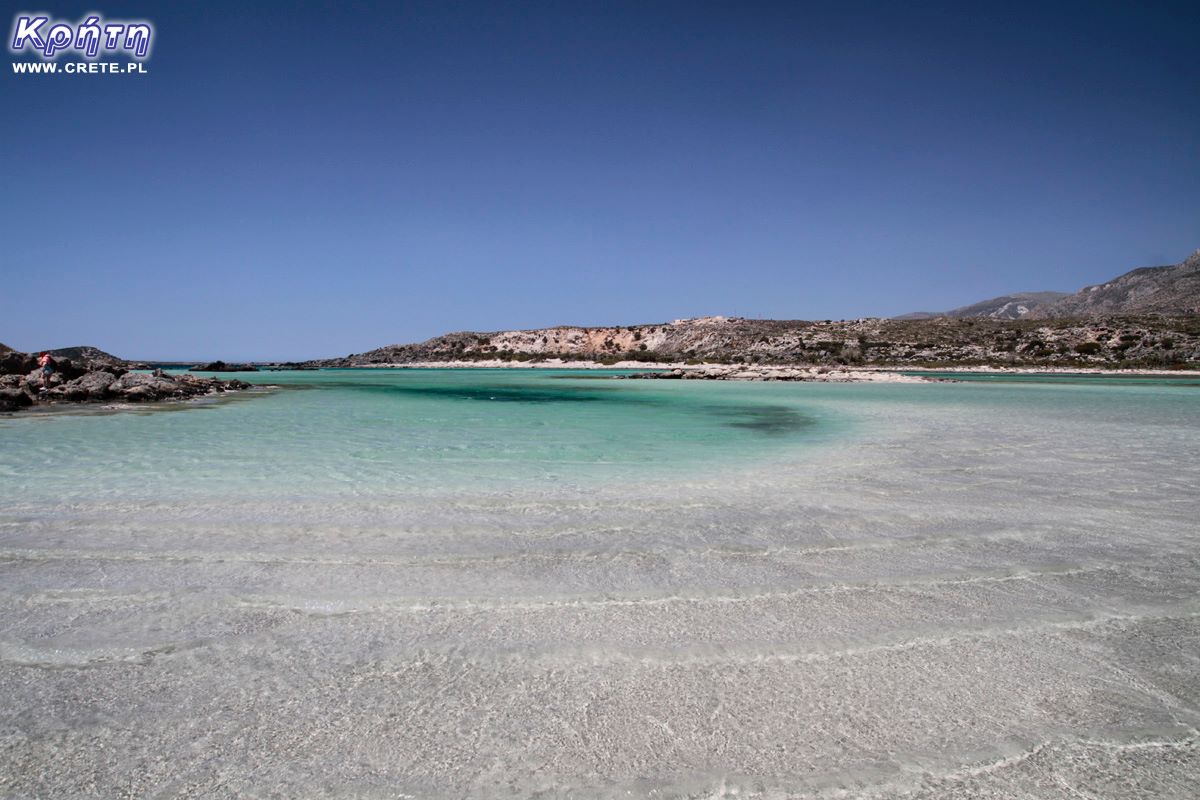 These two archaeological sites are very close to each other, so you can visit them on the same day. The size of the ruins of the palace in Phaistos and Gortyna, the old capital of Crete, gives an idea of ​​how formerly these places were impressive. You will not find here reconstructions such as those found in Knossos, the remains of these ancient buildings are as they were excavated by archaeologists. 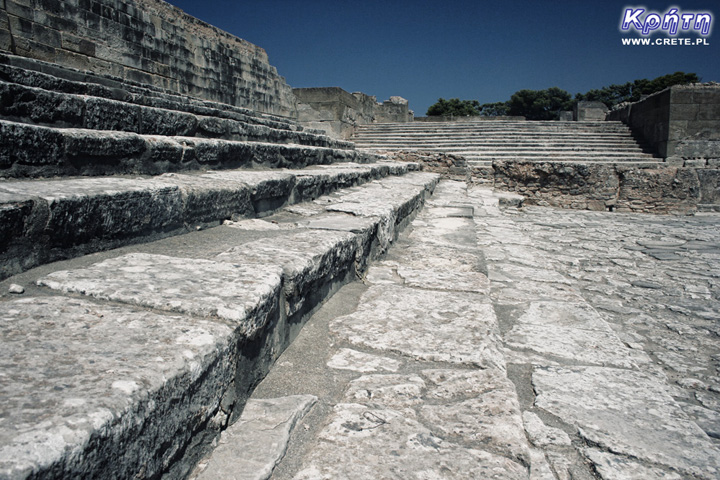 This beautiful cave, according to the beliefs of ancient Greeks, was considered the birthplace of Zeus. It is located on the outskirts of the south-eastern part of the largest plateau on the island, Lassithi. Leave the car in a paid car park (around 2.5 €) located just behind the village of Psychro. The entrance to the cave is located about 200 meters above the car park. It is worth to put on comfortable shoes, because the path is quite steep and leads on slippery stones. Admission to the cave costs 8 €. 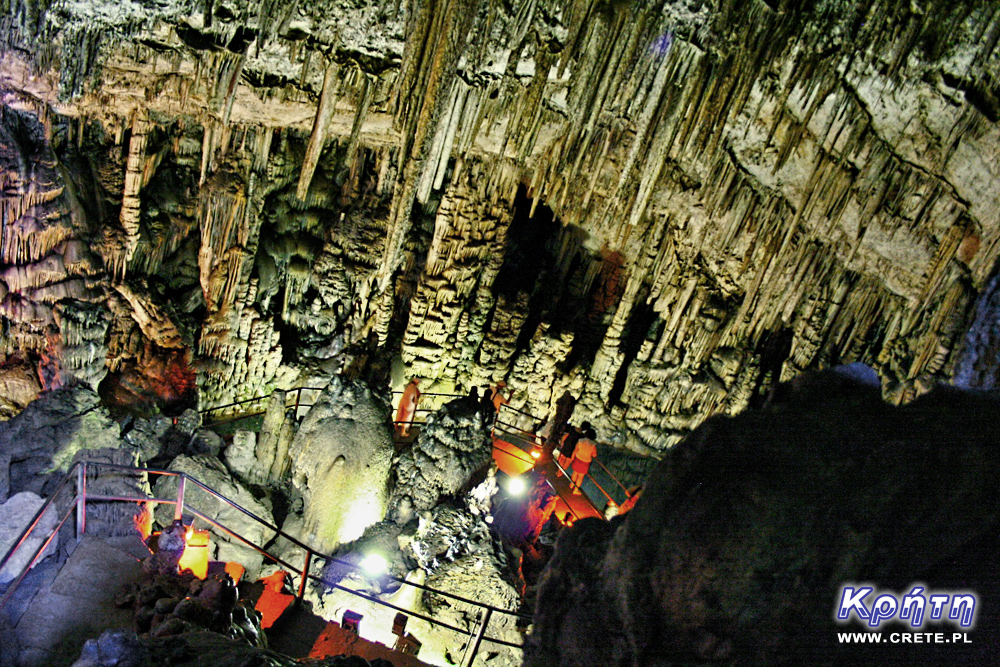 This picturesque monastery is of special importance for the inhabitants of Crete. The tragic events caused that Moni Arkadiou became a synonym for the struggle for freedom and rebellion against the Turkish occupation. To this day, its beautiful facade carries traces of past events. Even if you do not like sacred buildings, it's worth coming to Moni Arkadiou. The admission ticket costs 3 €. 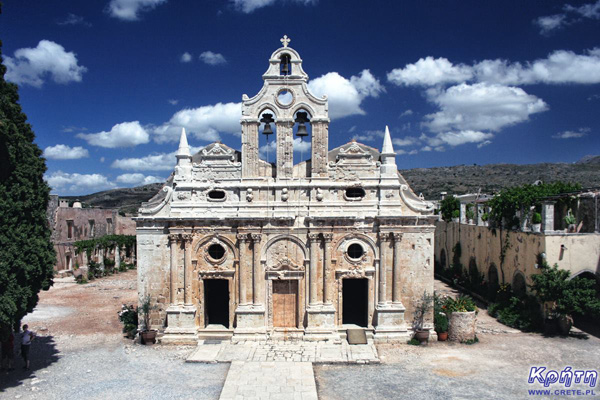 The most famous Minoan palace is also the most popular and the most controversial place in Crete. The ancient fragments of the palace, after being excavated, underwent concrete reconstructions, which is criticized by many people today. Nevertheless, to be in Crete and not to see Knossos is like being in Egypt and not seeing the pyramids ;-) Also to the question of whether it is worth coming here, we answer: of course it is worth! It is the cradle of European culture, regardless of how much concrete was poured here.

Although the excavation site is very extensive it is better to get ready for sightseeing in the crowd. Every day in the season there are huge amounts of coaches and cars with tourists. However, if you have the opportunity to visit in the afternoon, we strongly recommend it, especially since the excavations are open until the 20th in the summer. So if you come here in the evening or in the late afternoon, you can count on a slightly less burning sun and a much smaller number of tourists. It is worth remembering that from April 2016, sightseeing in Greece has become more expensive, which is particularly noticeable in Knossos. A normal ticket now costs 15 €, concessional 8 € (the previous regular price is 6 €). 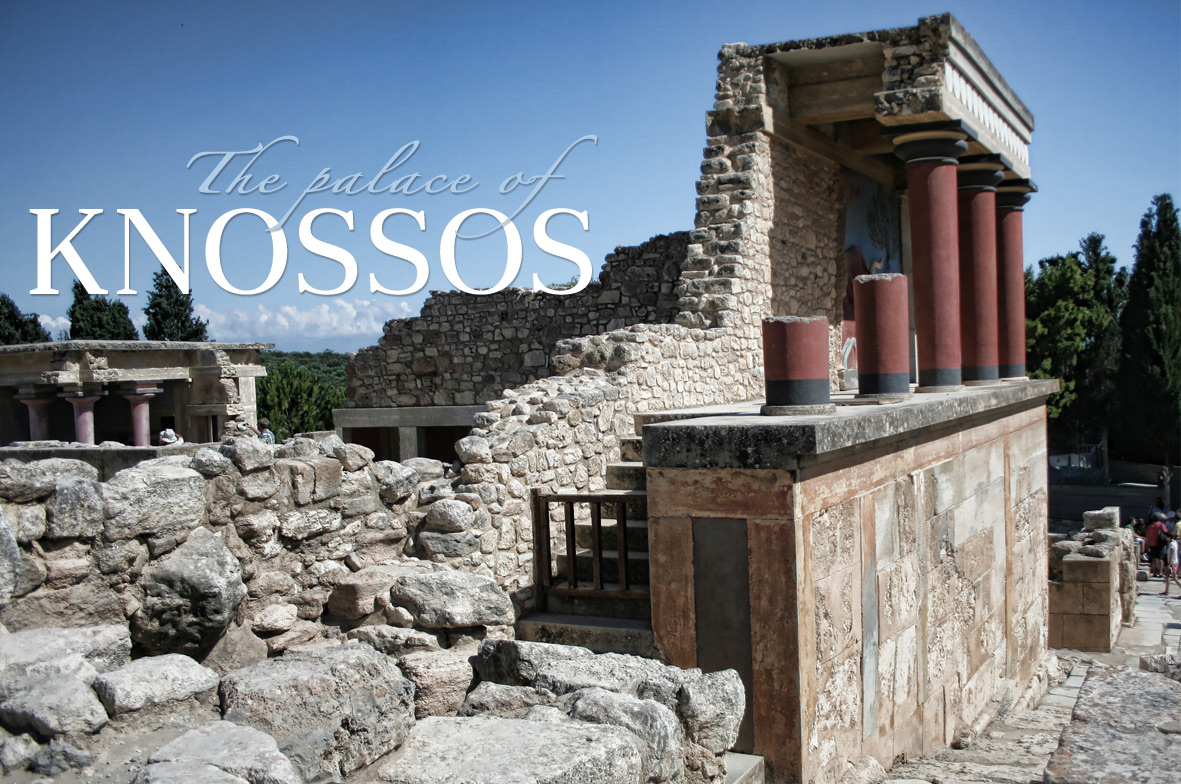 8. Heraklion and the Archaeological Museum located there

Behind Heraklion is the opinion of the ugliest city of Crete. In fact, he lacks the beauty of Chania or Rethymno, but we assure you that in reality it is not that bad ;-) The city is rather modern but there are a few old places where beauty is not lacking. It is worth mentioning the vicinity of the port and fortress Koules, or the area of ​​the Morosini fountain. For a large amount of time, it is worth taking a walk along the impressive walls surrounding the city. It is thanks to these fortifications that the city has not succumbed to the Turkish invasion for 22 years!

The obligatory point is a visit to the Archaeological Museum . After many years of renovation in the new spacious halls, you can see hundreds of artefacts from the most important excavations in Crete. Admission tickets after last year's increases cost: normal 10 €, reduced: 5 €. If you plan to visit Knossos, it is worth buying a combined ticket entitling you to enter the museum and excavations. The cost is "16 € (normal) and 8 € (reduced). Such a ticket is valid for three days. 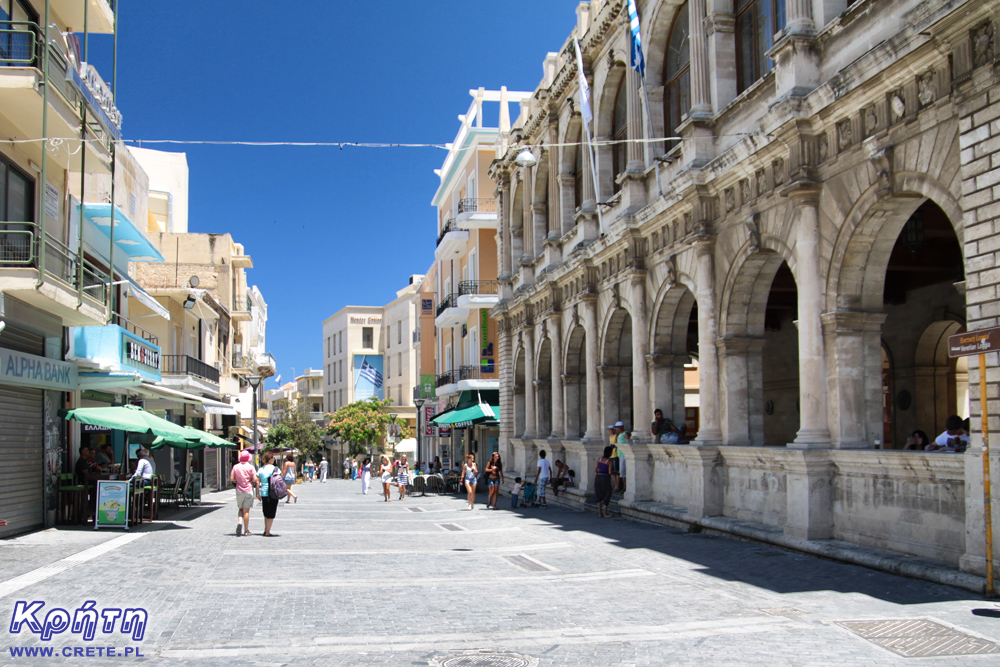 It is the third largest city in Crete. For years, he has been competing with Chania for being the most beautiful on the island. The assets of Rethymno are the Old Venetian port, charming tenement houses and the Venetian-Ottoman past, which is visible at every turn. It is also worth remembering that it is well connected with other cities of Crete. Buses running between them run quickly and often. So in order to avoid the hassle of parking the car it is worth considering KTEL here. 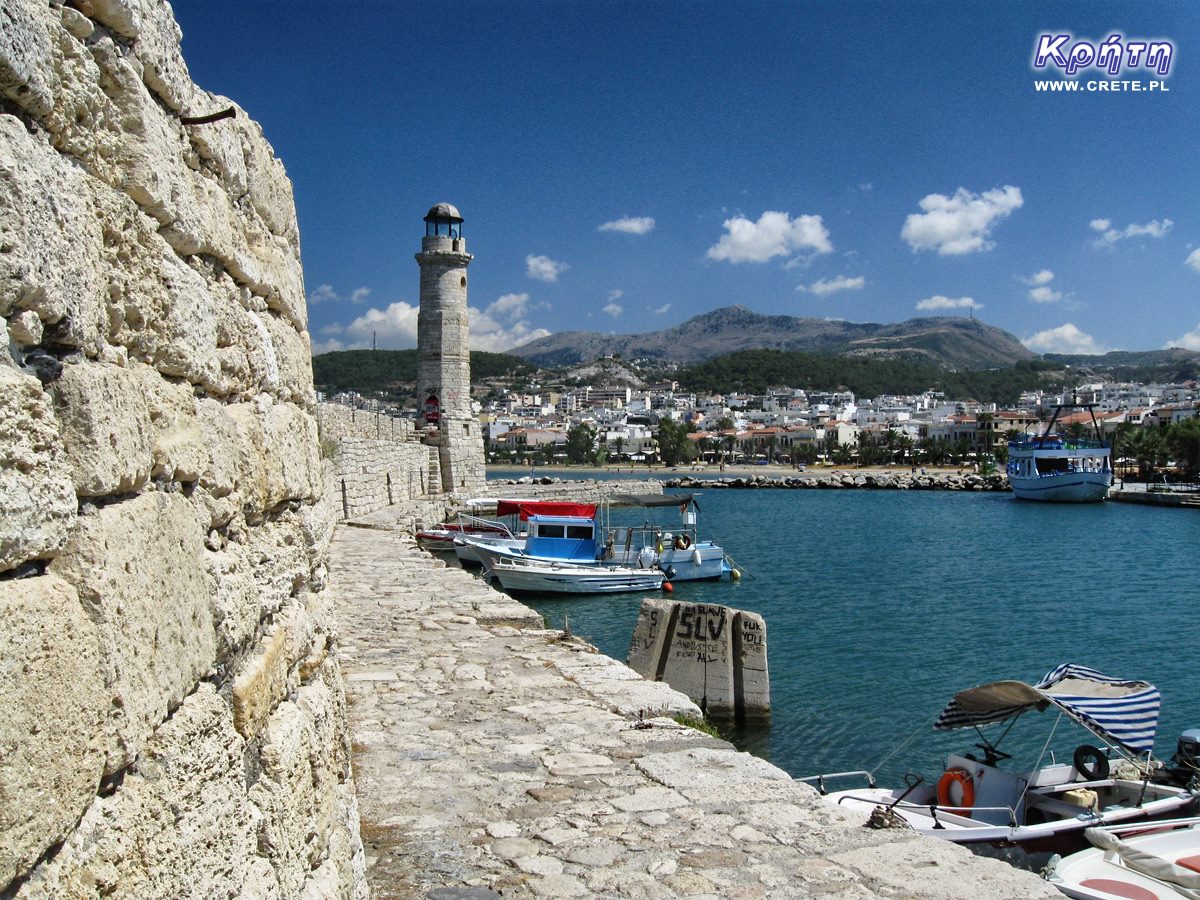 The crossing through the longest gorge of Europe, located in the southwestern part of the island, is a trip for the whole day. Self-organization is difficult because after passing Samaria, you do not go back to the starting point. There are several ways to solve this issue in this article . Due to the considerable distance to the passage (a total of 18 km) and returnBy ferry to Paleochora or Hora Sfakion, a trip to the Samaria Gorge can be taken into account when your hotel will not be further away than in the vicinity of Rethymno. 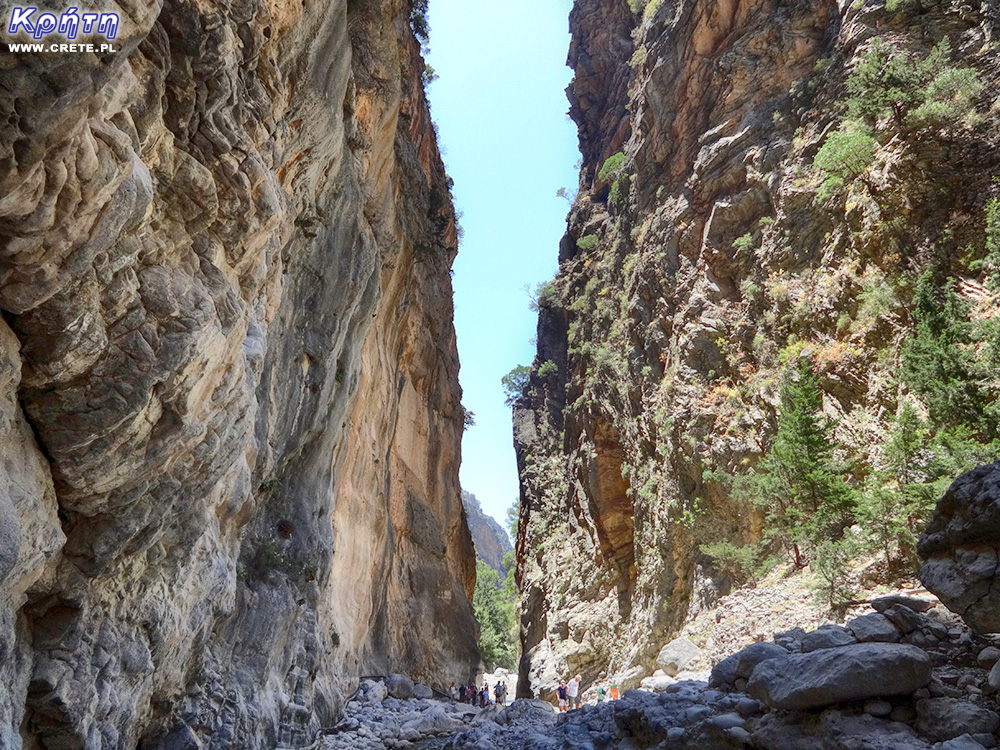 The ancient island of lepers is only second only to the palace in Knossos. Throngs of tourists visiting this place are attracted primarily by unusually beautiful views, as well as the dark and sad history of the island and its inhabitants. To get here, take a boat from Elounda or Plaka. The cost of the cruise is around 10 €, after arriving to the island you will pay 8 € for the admission ticket (discounted 4 €). There is an hour to visit on site. 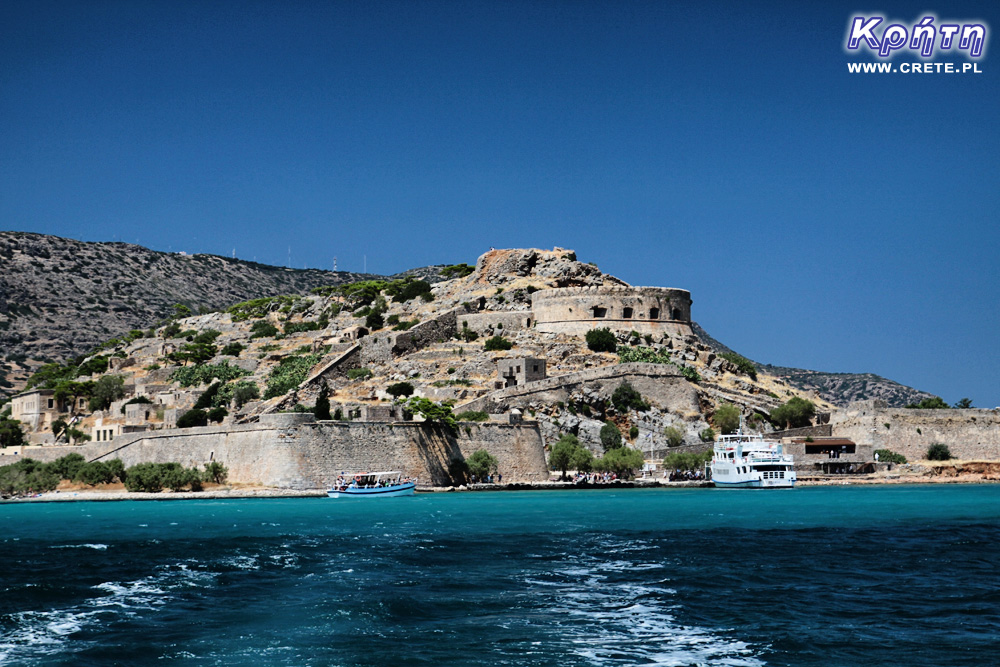 The beach in Vai is known primarily from the largest palm tree in Europe, growing on 250,000 square meters. Due to its remote location from popular tourist destinations, it's best to plan your trip here when your hotel is in the east of Crete. The price of its popularity is unfortunately the crowds and quite high prices. 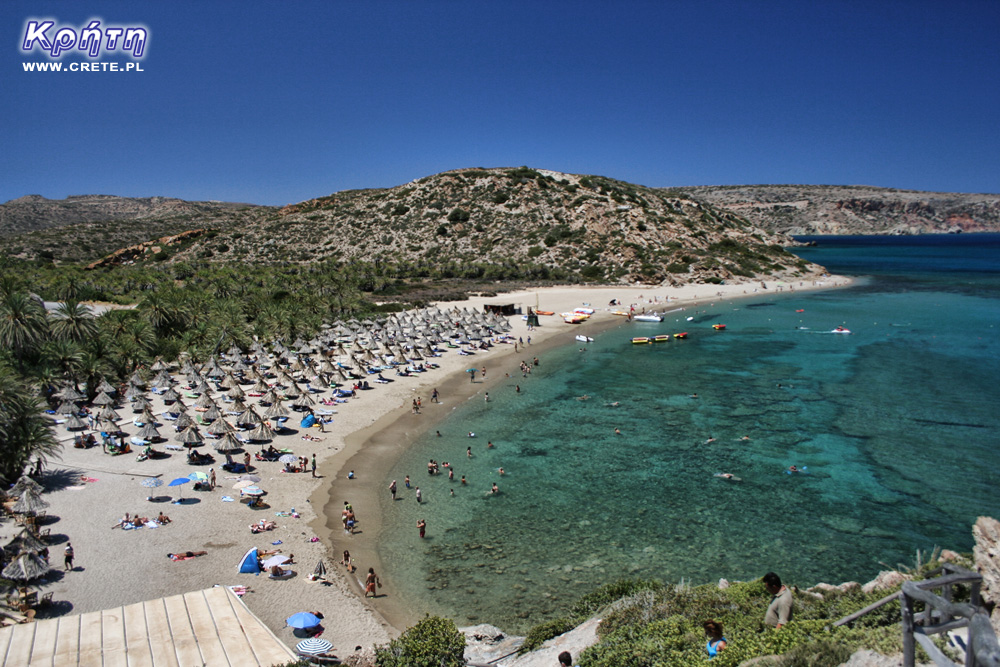 Balos: by car or by boat?

One of the flagship paintings associated with Crete is the characteristic frame of the Balos lagoon and the flat Tigani peninsula in the background. The picturesque nature of this place attracts crowds of enthusiastic tourists every year, and the beach itself has been systematically occupying very high places in the world and European beach rankings for a long time.

Crete is an unusual place. There are over 300 beaches on approximately 1,000 kilometers of the island's coastline, with over a quarter of them receiving the Blue Flag award every year. From all these places we have chosen twenty most-known, popular and for some reason exceptional beaches. Some of these places are generally recognized hits, but some are our personal choice, beaches which for some reason we deemed worthy to be included on this list. 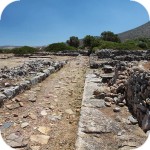 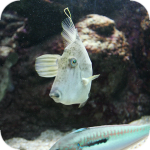 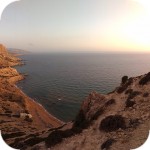