Although Crete is still estimating losses after recent heavy rains, work has begun on ad hoc damage removal. As one of the first to enter the action entered engineering forces, which yesterday began work related to the construction of a temporary viaduct in Platanias. According to preliminary estimates, this construction is to be commissioned already tonight or tomorrow. Everything will depend, however, on whether, at the current state of the road, it will be possible to create adequately stable bridge support points.

Construction of the Bileya bridge in Platanias
image source: www.zarpanews.gr/

Unfortunately, this temporary crossing, based on the construction of the Bailey bridge, will have its limitations resulting mainly from the width and bearing capacity of the span made. The movement will have to be implemented on the principles of a swinging movement. Before entering, traffic lights will be installed to regulate the flow of vehicles. However, the authorities argue that the option of building an additional overpass that will overcome these restrictions is also being considered.

Although the employees who care for the power grid try to remove failures as quickly as possible, there is still a large group of households that have been cut off from electricity for four days. A particularly difficult situation is in the area of the village of Alikianos, where a 3.5 km long power line must be rebuilt, which has been completely destroyed. 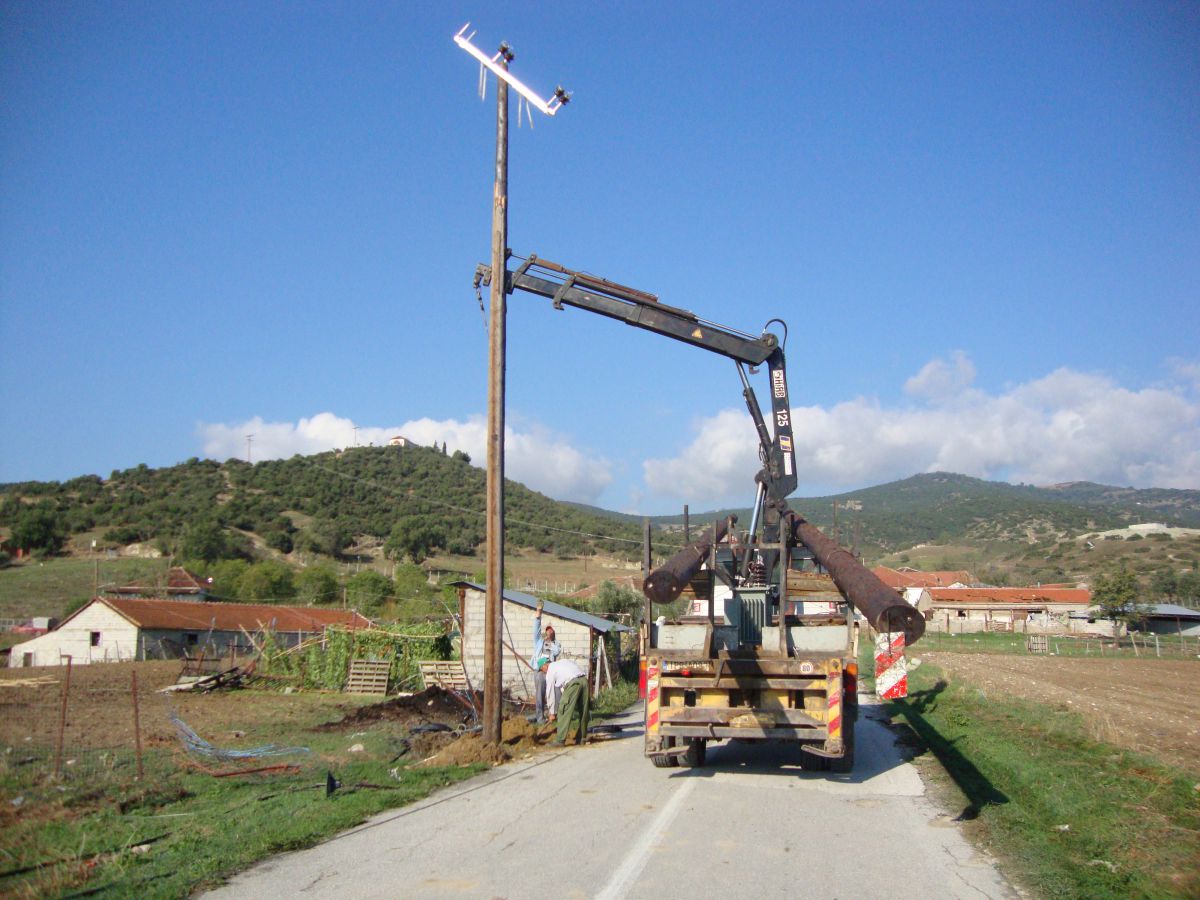 Work on the restoration of the power grid
source of the photo: www.zarpanews.gr

Mr. Giorgios Plokamaki, representative of the network administrator, ensures that power supplies should be resumed within two business days at the latest. In an interview with Super FM, he also said that at present the energy services have managed to remove about 75% of critical failures. Unfortunately, access to some of the mountain villages is currently not possible. It is difficult to estimate when it will be possible to carry out possible repairs there.

Overflowing with the Aposelemis dam

The consequence of the recent abundant rainfall is also the fact that the water reservoirs have reached their maximum capacity. At present, in the Aposelemis reservoir a controlled discharge of excess water is carried out by means of the overflow channel. This is one of the few positive aspects of the downpours this year in Crete. This is what the reservoir in Aposelemis looks like you can see in the following video:

Experts estimate that the current water resources accumulated within this reservoir constitute a 3-year supply sufficient to cover deliveries compliant with agreements signed by three municipalities: Heraklion, Agios Nikolaos and Hersonissos. In the summer, these communes will receive a maximum of 30,000. m 3 water a day. According to the agreements signed, the total annual water consumption can reach up to 8 million m 3 . It is worth adding here that in previous years, in the local media, there were voices questioning the sense of building such a large reservoir, which was rarely used. This investment was indicated as an example of money thrown in the mud. It is rather doubtful that similar opinions appear today. What's more, the reservoir at Aposelemis took over most of the rain water that flowed from the mountains in this area of Crete, Certainly limited the extent of possible damage that could have arisen as a result of downpours in towns below this building.

Record states in the water at Kournas

After heavy rains, the water level increased not only in the retention reservoirs but also in the Kournas lake. The shoreline, which was several dozen meters away from taverns during the last summer, runs through the shops and buildings located above the lake. In the picture below you can see how the water has entered the local streets and partially flooded the shops located there. For the time being, geese are the most joyful of this, eagerly swimming on sunken streets. Another landslides and traffic difficulties

Despite the fact that in the last hours Crete does not have to deal with such heavy rainfall, new landslides still appear. Such a situation occurred, among others, on the Nowa Droga at the height of Megala Chorafia (between Rethymno and Chania). A part of the roadway and road shoulders collapsed on the stretch of road. At present, with limited bandwidth, the passability has been maintained. Until further notice, the traffic will be carried out here by shuttle. A very difficult situation is in the mountainous regions of Crete. People living in towns located in these areas of the island report that many of them are completely cut off from the world or access is very difficult. There is information on the internet that at the moment there is no access to the Omalos plateau. The road leading to him was completely destroyed in several places. The damage is so serious that even good off-road vehicles can not handle it.

Unfortunately, the damage caused by the huge masses of water flowing down from the mountains affected not only the infrastructure in Crete, but also places considered tourist attractions. Look at the picture below how the beach of Preveli has changed, where a part of the beach has completely disappeared. The river, which formerly formed a picturesque bend along the coast, now flows straight into the sea.

I to jest bardzo dobra wiadomość