The strong storm front, which the synopticians named after the Greek god Hephaestus, brought with it a severe break in the weather. In many parts of Crete, residents are struggling with heavy rainfall, and in the case of higher parts of the mountains also with snow. As reported by local media on the Omalos Plateau, snow depths reach up to half a meter. Part of the Lassithi Plateau was flooded due to heavy rainfall. Regional authorities reported that the area was excluded from car traffic. 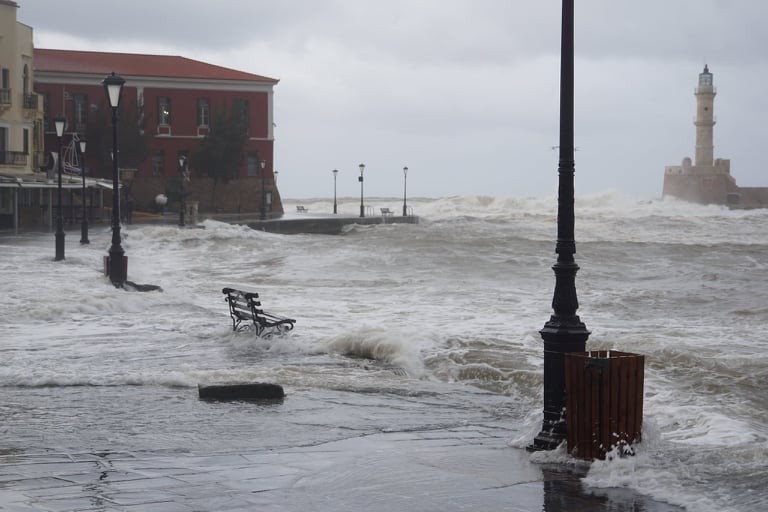 It is noteworthy that during the passing front in Crete, a drastic drop in temperature was noted. In the last hours, the mercury bar in thermometers stopped in the coastal zone on the indication around 7-8 ° C. It is much cooler in mountainous areas. Temperatures reported in these areas of Crete are between 0 and 2 ° C.

Synoptics expect that tonight temperatures may still fall slightly. Consequently, this will also cause snowfall in the lower parts of the mountains. In the region of the western part of the island, snowfall can already occur at an altitude of 800m. In eastern Crete, on the other hand, snow may fall on areas above 1000 meters above sea level

Snow on the Omalos plateau


All this will make the conditions on mountain roads very difficult. Local authorities urge that people who need to move their cars during this period should be equipped with chains on the wheels.

Drivers traveling BOAK (New National Road) are also asked to exercise caution. Heavy rain can significantly reduce visibility. A large amount of water can also reduce adhesion. Local landslides are also possible, and strong winds can break trees and branches that may fall on the road.

Unfortunately, these very unfavorable weather conditions are also accompanied by strong gusty winds, whose violent gusts can reach even over 100km / h. It is for this reason that maritime traffic has been suspended for the next 24 hours. All ferries making scheduled connections have been stopped at the port. According to weather forecasters, a slight improvement in weather can be expected tonight. For now, however, the sea level for the Crete region is estimated at 8-9 degrees on the Beaufort scale. Locally-prevailing conditions may be even worse, and according to weather forecasters, they can be rated at up to 10 degrees on the Beaufort scale.

Strong wind was also the cause of high waves that could be seen in the Venetian Port of Chania . Water flowing into the quay not only reached the taverns located around the port but also reached the walls surrounding the Firkas fortress.