A new, cold atmospheric front called "Hioni" (Χιόνη) came from Tuesday on Greece. It brought strong northern winds, storms, downpours and a significant drop in temperature. Due to the bad weather, the General Secretariat for Civil Protection issued a warning and informed the state services and all regions in the country to be prepared to deal with problems caused by severe weather conditions. Citizens, on the other hand, recommended that special vigilance be observed and that measures be taken to protect against the dangers of bad weather.

One of the landslips photographed on the roads of Crete
the photo comes from the website www.parakritika.gr

Unfortunately, as you probably guessed, "Hioni" in Crete caused a lot of damage both on the roads and in the cities. Below we have selected a dozen or so of the most important news items posted on local news websites.

Destruction mainly affected the western part of Crete. Many roads, both major and provincial, have been flooded, so crossing them is very difficult or even impossible. For example, this was the case on the national road between Vamvakopoulo and Mournies, Platani and Nea Chorio. 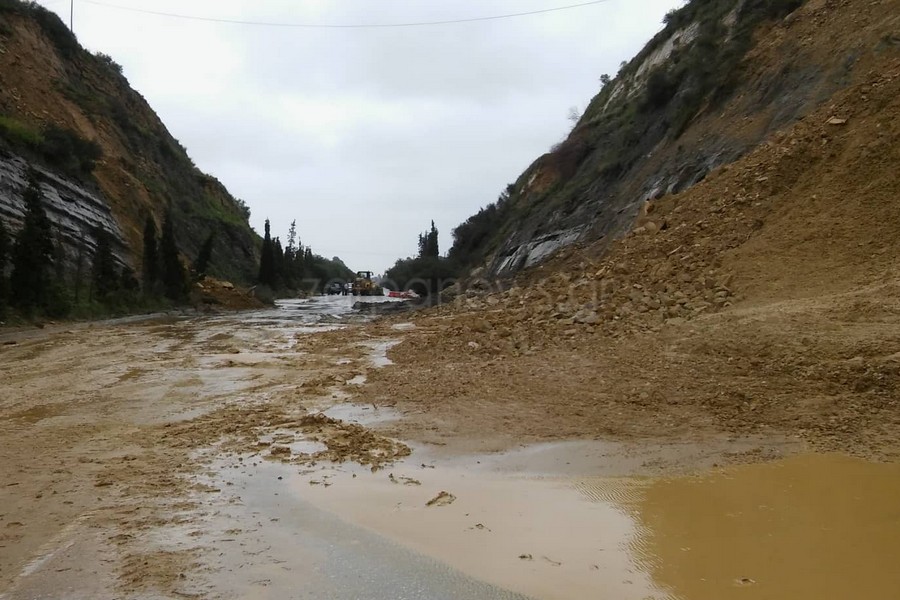 Road in the Kissamos area
The photo comes from the portal www.zarpanews.gr

In Kissamos, on the national road at Stalos, intense rainfall caused so much powerful landslides and cracks that the current situation is literally tragic.

In Drakani in the Kolimbari area the road burst in the middle along and there was a partial subsidence.

Road in Drakani
The photo comes from the www.parakritika.gr portal

In the municipality of Platanias, the Irdanos river level rose dangerously, and the coastal part of the town was severely damaged by flowing water. This applies especially to the port area and fragments of the beach. In addition, the water burst into the supermarket, where it caused huge damage. On the roads there were numerous landslides and trees were felled. For the same reason, the road from Tavronitis to the south-west coast of Paleochora was closed.

The main streets in the area of Sternes and Agios Onoufrios located on the Akrotiri peninsula have been flooded, which means they are impassable. There are problems with the supply of electricity, and many lower homes have been flooded or flooded. The fire brigade in the whole region gets a lot of requests with requests to pump out water and remove other damage.

There was a partly damaged bridge between the villages of Maleme and Syrila. Due to the very strong current of water in the river, there is a risk of complete collapse of this crossing. This road to appeal was closed for all traffic.

Also in the area of Apokoronas there are landslides and there has been a problem with road traffic, especially those located in the lower areas.

There are much less problems in the Sfakia region, but there are also cases of flooding, fallen trees or landslides. As the local authorities inform from the dawn, this commune is deprived of electricity

The problems on the national road from Chania towards Rethymno occur in many places, driving it requires a lot of attention and caution from the drivers. 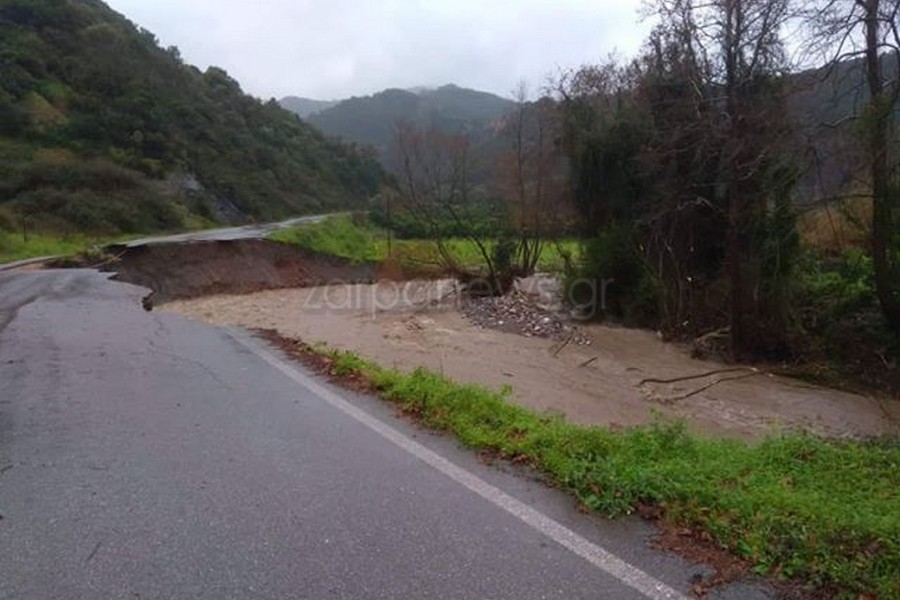 Landslide in Fournes
the photo comes from the portal www.zarpanews.gr

The road leading to the Omalos plateau has been devastated by flowing streams of water in the Fournes area.

Bad weather also did not miss the Venetian Port in Chania. A strong wind contributed to the sinking of one of the boats moored here, which was used to catch sponges. 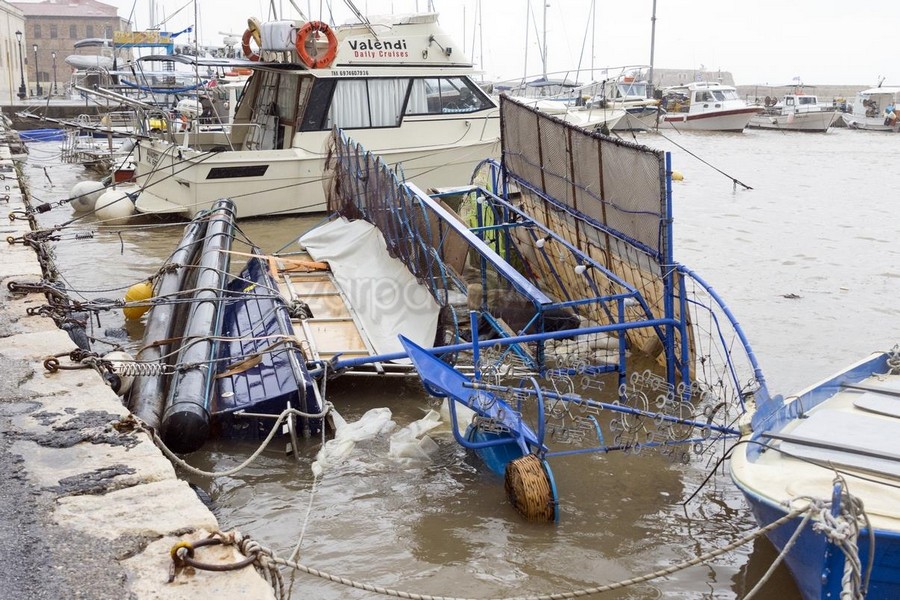 Boat immersed in the port of Chania
The photo comes from the portal www.zarpanews.gr

Waves hitting the wharf of the Venetian Port are so intense that they reach even local shops.

Bad weather also contributed to the flight schedule at Daskalogiannis airport in Chania. Some flights have been canceled. According to communications officer Fraport Greece, Yiannis Papazoglou: "There is a problem with the approach of airplanes due to very strong wind and rain." In addition, Aegean's airplanes were hit by lightning. Fortunately, as the technicians from the airport say, it did not cause major problems.

A strong wind reaching even 10 on the Beaufort scale forced the suspension of the implementation of sea cruises including regular ferry connections made between the Greek ports. In connection with the introduced changes, passengers who intend to travel in the last days should contact local port authorities or travel agencies acting as intermediaries in the sale of tickets.